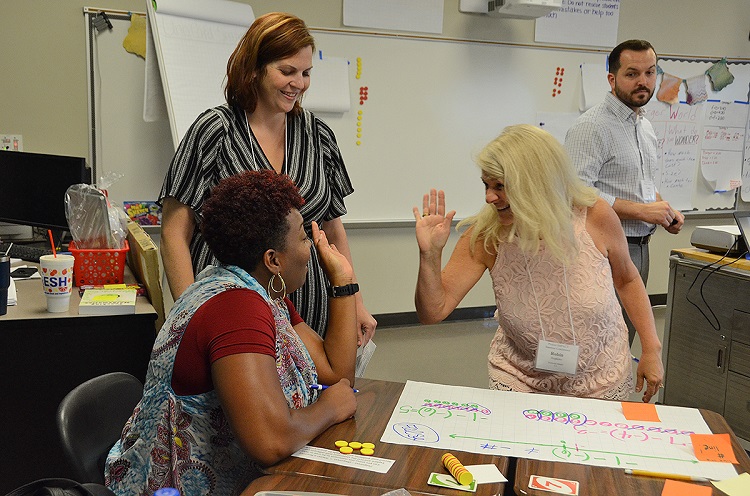 With multiple MTSU degrees mostly in the science fields but taking a new position as an instructional coach at Nashville Collegiate Academy, Chatoria Franklin "had light bulbs going off" Thursday (June 14) during the Project IMPACT summer conference at Coffee County Middle School.

"Oh, my God. Amazing," Franklin, a Murfreesboro resident and Middle Tennessee State University science education (biology emphasis) doctoral student, said of her initial exposure to Project IMPACT. "I feel like I'm learning math for the first time. Within five minutes, I had light bulbs going off and I have been teaching for 10 years. Now, I can impress upon my teachers to learn more, do more and grow more," a central theme for the conference.

Nearly 70 first-time math teachers attended the conference, joining 85 educators who have been involved in most of the six years of the project and 12 teachers who had dropped out, but returned for the final year.

This year, teachers involved for most of the previous five years led the conference, which ended Friday (June 15). They shared tasks, resources and activities as part of 17 school-based teams' participation in a yearlong professional development.

Keynote speaker Amy Parks of Michigan State University told an attentive audience "if a child is crying (upset in the classroom) in math, you are doing it wrong. If you do what feels good, we are doing it right."

"This has really impacted what I do in the classroom," said Kim Quick, a North Coffee educator in her 20th year of teaching.

Their implemented strategy includes open-ended tasks, sharing ideas, sharing mistakes and making sure students do not give up -- letting students try, regardless, Quick said.

"It's students and teachers taking math risks in the classroom," she added. "Before, I wanted to do it may way. Through Project IMPACT, I've discovered so many ways to solve problems. You are going to make mistakes. Hopefully, the mistakes will not be made again."

Former professor and director of the MTSU Mathematics and Science Ph.D. program Angela Barlow, who is now dean of graduate studies and director of sponsored programs at Central Arkansas University, said the returning Midstate educators were "showcasing their work -- what they did in the classroom during the 2017-18 academic year." This included meeting outside of school hours, reading books and looking at things they were doing in the classroom."

MTSU has more than 240 combined undergraduate and graduate programs.