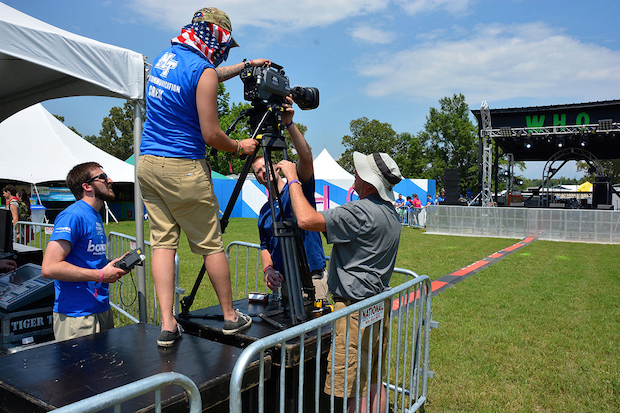 Amanda Pierce is one of thousands of students taking a class this summer at Middle Tennessee State University.

But unlike most, her classroom is behind one of the stages at the Bonnaroo Music and Arts Festival, where she is serving as student production manager for the MTSU Mobile Production Lab.

"I think it will help me kick-start my career and my leadership abilities," said Pierce, a senior from Murfreesboro majoring in electronic media communication in the College of Mass Communication. "It's totally awesome for a classroom."

Pierce is among about 40 MTSU students, faculty and staff working at the four-day festival under the second year of a unique partnership between the university and organizers Superfly Presents and AC Entertainment.

Twenty-eight are working with cameras and control boards in MTSU's mobile studio, capturing performances on the festival's Who Stage. The rest are working as multimedia journalists, filing stories and videos for area news media outlets.

"It's important that we extend our teaching beyond the walls of our college to the places where contemporary media and entertainment are at their best."

Pierce manages the student crew of camera operators, sound technicians, producers and technicians under the direction of assistant professor Robert Gordon, who has almost 40 years of experience in broadcast, cable and network programming.

"Our time at Bonnaroo is as hands-on and as realistic an experience as can be offered."

Meanwhile, on the other side of the 700-acre site, Pat Embry, director of MTSU's John Seigenthaler Chair of Excellence for First Amendment Studies, and associate professor Leon Alligood are mentoring the student on-site content team. Both have extensive prior experience as editors for area newspapers.

The team's work can be found on the website of MTSU's student newspaper, Sidelines (www.mtsusidelines.com), and other outlets, such as The Tennessean and the Murfreesboro Pulse.

Students set up and conducted their own feature advance phone interviews with Nashville-based rock bands playing at Bonnaroo, Embry said. They will work each day from midmorning until late at night, filing stories, taking photos and shooting video.

"From a student standpoint, the experience in building a portfolio is unparalleled," he said. "Having so many editors and veteran writers and reporters on site to help the students with their work is invaluable."

Gordon, over at the Who Stage, echoed that thought: "Students get jobs from experiences like these."