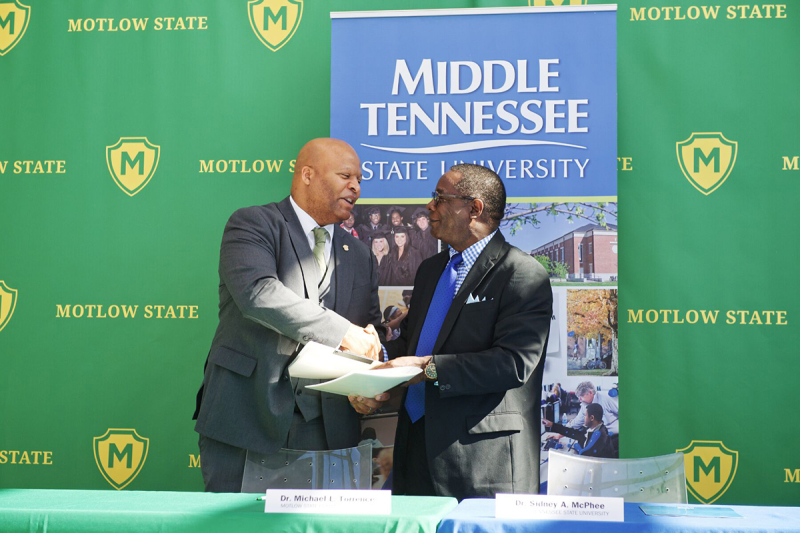 The presidents of Motlow State Community College and Middle Tennessee State University signed an agreement Tuesday that highlights the pathways for Motlow students with associate degrees to move seamlessly to the four-year university.

The agreement, signed on the college's Smyrna campus with MTSU President Sidney A. McPhee, was one of the first official actions by new Motlow State President Michael L. Torrence.

"A strong relationship between Motlow State and MTSU is central to ensuring quality service to the communities we partner to serve," Torrence said. "The formalization of this transfer scholarship plan will help our team of Motlow advisers and completion coaches as they frame long-term academic options for student success."

The university will tout its efforts to aid Motlow transfers as the MTSU Promise, pledging support to help them complete their associate degree, then move forward in seeking a four-year degree.

"MTSU is the No. 1 transfer destination for students in Tennessee and more Motlow students transfer to MTSU than to any other four-year institution in the state," McPhee said. "I am so pleased that we are renewing this important friendship and partnership today."

The agreement calls for Motlow to share with MTSU directory information of the college's students so they are included in tailored communications of emails and hard-copy mailings that support the process of planning for the bachelor's degree after successful completion of the associate degree.

Also, the agreement says Motlow students who agree to participate in the MTSU Promise will sign a "reverse transfer" agreement, meaning if they fail to complete their associate degrees prior to transfer, they would automatically receive their associate degree from Motlow once sufficient credits have been completed at MTSU. MTSU is No. 1 in the state in using the reverse transfer process.

MTSU, through its existing Guaranteed Transfer Scholarship Program, will provide aid for Motlow students who transfer to MTSU in the amount of $3,000 per year for two years, or a maximum of four semesters, based on achievement of a 3.0 GPA.

Motlow transfer students will not be eligible to apply to receive the Guaranteed Transfer Scholarship until after completing 45 credit hours at Motlow.

Deb Sells, MTSU's vice president for student affairs and vice provost for enrollment services, said the application deadline annually is Feb. 15, which means the majority of participating Motlow students will have completed 60 credits before transfer

Sells also said MTSU will revise letters of rejection for students in the Motlow service area who apply to MTSU for freshman admission, but who are not admitted. The letters will also say the student is being placed in a "deferred admission" category, and that MTSU recommends that they enroll at Motlow for two years of study under the Tennessee Promise, the state-funded scholarship that pays tuition and fees for two-year colleges such as Motlow.

MTSU will also guarantee to such students that if they complete 60 credits with a 3.0 GPA at Motlow, they will be guaranteed admission and a scholarship to attend MTSU for their last two years of study, Sells said.

"Transfer scholarships are important forms of inspiration when students plan their academic goals," Torrence said. "Scholarship targets help build confidence among students that their long-term plans are academically, financially, and logistically achievable. That assurance helps galvanize student focus on priorities they are accountable for on a day-to-day basis."

"Our partner, MTSU, will make this commitment to all of our eligible graduates and this is remarkable," Torrence added. "It means that all Motlow students can earn this noteworthy financial accolade. It is our hope that this Motlow-MTSU partnership will pay dividends for our students by incentivizing them to build a sound plan, stay on track, and finish well."

McPhee thanked Torrence and his administration for their "tireless work on behalf of students seeking to build upon their work at Motlow and complete their higher education at MTSU."

For more information about the MTSU Promise, go to www.mtsu.edu/mtsupromise.