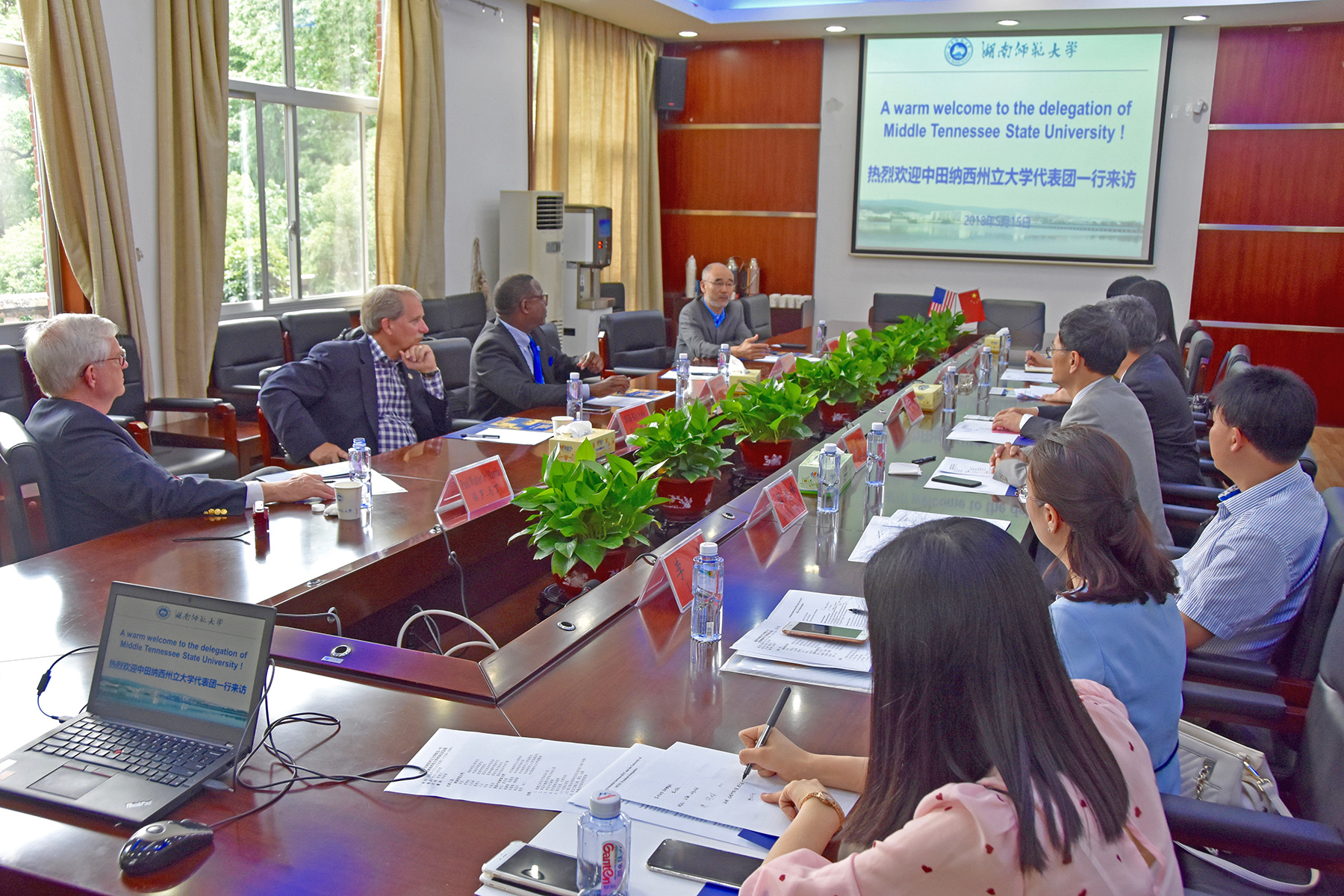 Middle Tennessee State University's True Blue spirit reached the campus of Hunan Normal University in China, as students there peppered President Sidney A. McPhee with questions ranging from the beauty of the Murfreesboro campus to its signature slogan.

One student clearly delighted McPhee, earning a fist bump during the Q&A part of the president's lecture Tuesday to the study-abroad prospects, when he asked what it means to be True Blue.

"It means that we at MTSU are more than just a university; we are a family," McPhee said. "We stand for certain values, such as honesty, integrity, commitment to reason, being engaged in our studies and in our community.

"It also reflects the welcoming spirit we will offer each of you when, hopefully, you attend our university."

McPhee also urged students "to step outside of their comfort zones" by widening their experiences -- from things as small as their daily lunch routines and as large as attending an American university like MTSU.

"Give thought to doing things that allow you to broaden your perspectives, and perhaps make you uncomfortable at first," he said. "Don't do the same things over and over again. Meet new people and do new things -- not only in other countries, but here on your campus."

MTSU's relationship with HNU dates back to 2004 and is its longest-running partnership with a Chinese university. More than 20 MTSU students have taken part in exchange efforts at HNU, while more than 30 HNU students have been to the Murfreesboro campus.

HNU President Jiang Hongxin and his wife, Jane, have been frequent visitors to the MTSU campus. The HNU first lady studied at MTSU and the couple were guests of McPhee during the Great Tennessee Eclipse event in 2017.

MTSU has made international engagement one of its strategic priorities. As such, McPhee has focused on MTSU's international undergraduate and graduate enrollment, particularly in China.

The MTSU delegation includes state Sen. Bill Ketron, R-Murfreesboro, and businessman and donor Paul Martin, the first graduate of MTSU's Honors College and a supporter of the university's China outreach and study into ginseng.

Ketron, Martin and MTSU Associate Vice Provost Guanping Zheng, a graduate of HNU, joined McPhee in a meeting before his lecture with HNU officials about next steps in the ongoing partnership between the two institutions.

More than 30,000 students take classes at one of HNU's five campuses in the Hunan province. The university was named one of the country's 100 key higher education institutions, giving it a higher priority in obtaining government funding.

The president's stop in Changsha was the third in a four-stop outreach in China. It began in Beijing, then Hangzhou and will move next from Changsha to Nanning, home of Guangxi University. The trip was organized by MTSU's Confucius Institute.

In Nanning, McPhee will also tour several traditional Chinese medicine facilities with MTSU professors involved in research between the Guangxi Botanical Garden of Medicinal Plants and the Tennessee Center for Botanical Medicine Research.