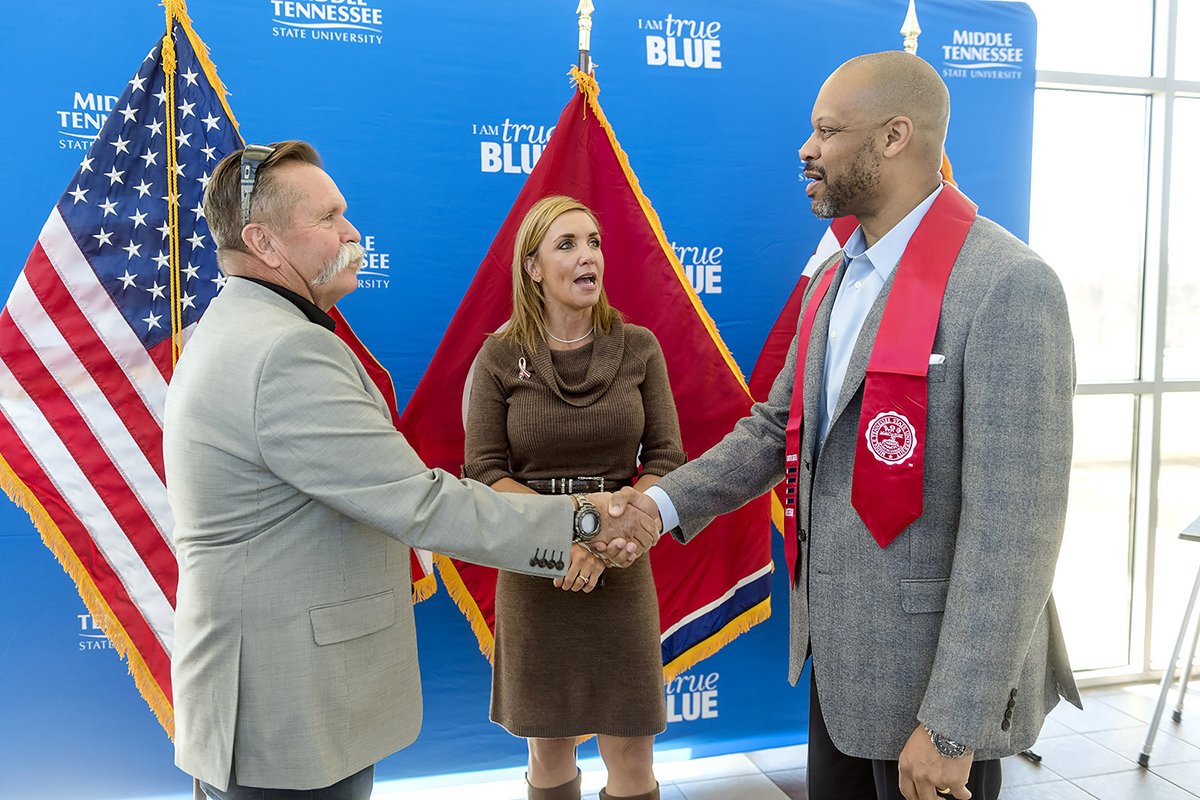 MTSU graduating student veteran Darrell Wright, right, receives a congratulatory handshake from David Corlew as Hilary Miller introduces the pair. Corlew is a board member and Journey Home Project co-founder along with legendary musician Charlie Daniels. The organization has provided $120,000 for the Daniels Veterans and Military Family Center that Miller directs. Wright will graduate Dec. 16 with a bachelor's degree from the Jones College of Business. (MTSU photo by J. Intintoli)

Darrell Wright II served his country from 1992-2001, started a family, entered college as a freshman at MTSU in 2013 and helped fellow student veterans in the Daniels Veterans and Military Family Center.

En route to graduating Saturday, Dec. 16, with a bachelor's degree in business (3.4 GPA and double major in finance and economics), Wright and nearly 20 fellow student veterans took a break between classes, work and their families to receive a special red stole they will wear at commencement.

In a Tuesday (Nov. 28) Graduating Veterans Stole Ceremony in the Miller Education Center's atrium, the university recognized student veterans for not only their service to their country, but for finishing their dream of college graduation.

A native of Anderson, Indiana, Wright, 48, said he now "plans to get a job and go to graduate school in the fall." His plan includes moving from Murfreesboro to Bloomington, Indiana, to attend the Kelly School of Business at Indiana University.

"This has been a good experience," said Wright, who has served as a counselor in the MTSU veterans center. "As a nontraditional student, when people find out you are a veteran, every one of them will say, 'Thank you for your service.' They would ask what is different in America, compared to where I have been overseas. Everyone is always very caring, giving and understanding."

At the veterans center, when a student veteran shows up, Wright said he would assist them "if they had trouble signing up for classes or were having trouble in a class. We try to get the resources he or she needs to be successful."

Wright's final Army job was as an X-ray technician at Joint Base Balad in Iraq. Overseas, he also served in Africa and Afghanistan.

He and wife DeAndra are parents of four daughters, Dariayn of Murfreesboro, DiAnna and Darra at the University of Memphis and Annesia at Indiana University.

"Thank you for choosing our university," McPhee said. "You made our institution a better place." He also thanked them for the sacrifices both they and their families made.

Byrnes said the student veterans are part of a diverse student body and thanked them "for their presence in our classrooms."

Hilary Miller, director of the veterans center, gave them a commemorative coin, symbolizing continued contributions to the Daniels Center and the university as alumni.

Student veterans in attendance have served in the U.S. Air Force, Army, Navy and Marines, and some continue to serve in the National Guard. Nearly 120 will graduate in December.