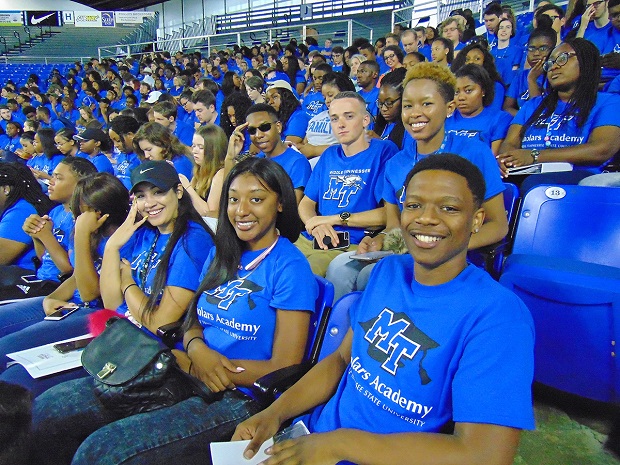 Part of the record 357 Scholars Academy students waits to hear their next challenge when they gathered in Murphy Center earlier this month. (Submitted photo)

The Middle Tennessee State University Scholars Academy for freshmen has a twofold plan for their individual success.

Part of the aim for what became the largest Scholars Academy freshman summer institute (357 students this year compared to 312 a year ago) includes "positioning them to not only be successful for now, but for next year and the next seasons of their life," said Vincent Windrow, assistant vice provost for Student Success.

The Scholars Academy, a part of the Office of Student Success, was created to serve all students with emphasis on the needs of first-generation and Pell Grant-eligible students. There are academic, social and long-term impacts.

To learn more about the Scholars Academy, visit http://www.mtsu.edu/studentsuccess/scholars-academy.php.

"The one consistent variable is that they are all first-year students, first time in college, first time being 18, first time away from home, first time living in a dorm and first time parents were not supervising their actions," Windrow said.

One of the highlights was a one-day trip to Louisville, Kentucky, to visit the Muhammad Ali Museum. Windrow said it's "transformational" for the teenagers.

"Life is about being fluid, not static," Windrow added. "Higher education is about higher learning and higher doing, and, ultimately, that's what Scholars Academy is about. We want to provide these students with an environment that allows them to learn and position them to have more positive interactions in MTSU's diverse community."

Typically, these students will be "more engaged, more will be retained and more will graduate," he said, adding, "student success starts in the classroom. The instruction they receive (from 12 faculty members) will help them in the fall."

Jackson Orlowski, 18, of Knoxville, Tennessee, and Knox Catholic High School graduate, said the 14-day institute "helped as far as getting used to the campus, meeting people early and setting up in your dorm. There was team bonding where you get to know the group really well."

Orlowski plans to major in advertising in the College of Media and Entertainment.

"It helps us prepare how to study," the journalism major said, adding they took part in a scavenger hunt and attended an MTSU women's soccer game.

In addition to agreeing to participate in all institute events for the Aug. 11-24 program, the only requirements were a $45 fee and two canned goods -- one for the MTSU Student Food Pantry and one for the Rutherford County Food Bank.

"Giving to the food pantry teaches them to give because they are part of the student population and giving to a larger cause when they give to the food bank," Windrow said.