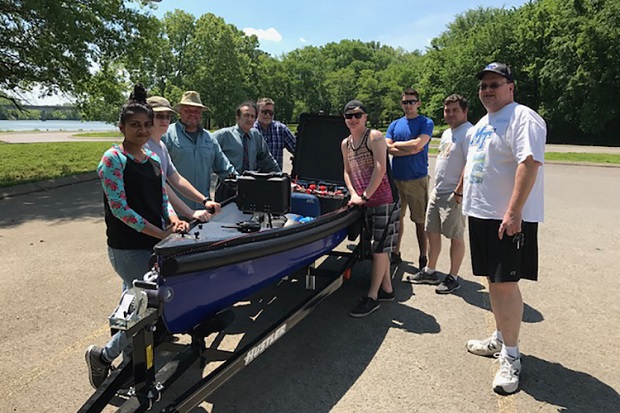 Solar Splash, the world championship for intercollegiate solar/electric boating, hosts a five-day competition that seeks to show the feasibility of solar energy and promote interest in science and technology. This year's showdown runs from Wednesday to Sunday, June 7-11, in Springfield, Ohio, and will feature 12 teams from across the country.

Team co-captain Bradley Eckles hopes MTSU will snag first place after landing second place the past two years. The team is a part of the Experimental Vehicles Program within the Department of Engineering Technology.

"This boat is absolutely a team effort; 20 to 30 students have participated in building this craft so we hope to place real well," Eckles said.

Competition judges look for a number of factors when determining the top solar-powered boats such as performance, speed, boat aesthetics and technology.

With 23 years of avionics experience with the Air Force, Eckles remains confident about the final tweaks of wiring he's helped with to ensure the solar boat will withstand most of the obstacles and tests it will face.

Before the race begins, all boats will go through safety inspections by competition officials.

"Our pilots have to do a swim test and weigh-in, and then they have to inspect the boats for safety because all of these are experimental vehicles," Eckles said.

Solar Splash is an educational experience that allows the development of teamwork and enhancement of several skills outside of engineering. This year's MTSU team hopes the third time's the charm after its consecutive second-place finishes.

Team member Dustin Falls joined the solar boat team less than a month ago, but has contributed nicely to the sleek True Blue boat's setup.

"I've mostly been working on the drive train, everything from the electrical motors down, I've been a part of," Falls said.

Across the board, the summer heat didn't stop the team's efforts inside the Voorhies Engineering Technology lab space of getting its work finished in time for the event.

"It's summer and I've got some extra time," Falls said. "I've only got so many classes during the summer so I was able to come help out a little bit more."

In addition to Eckles and Falls, team captain Eli Little and David Henderson will be traveling to Ohio, although several other students have worked on the entry.

For more information about the program, call 615-494-8786 or email Foroudastan at Saeed.Foroudastan@mtsu.edu.