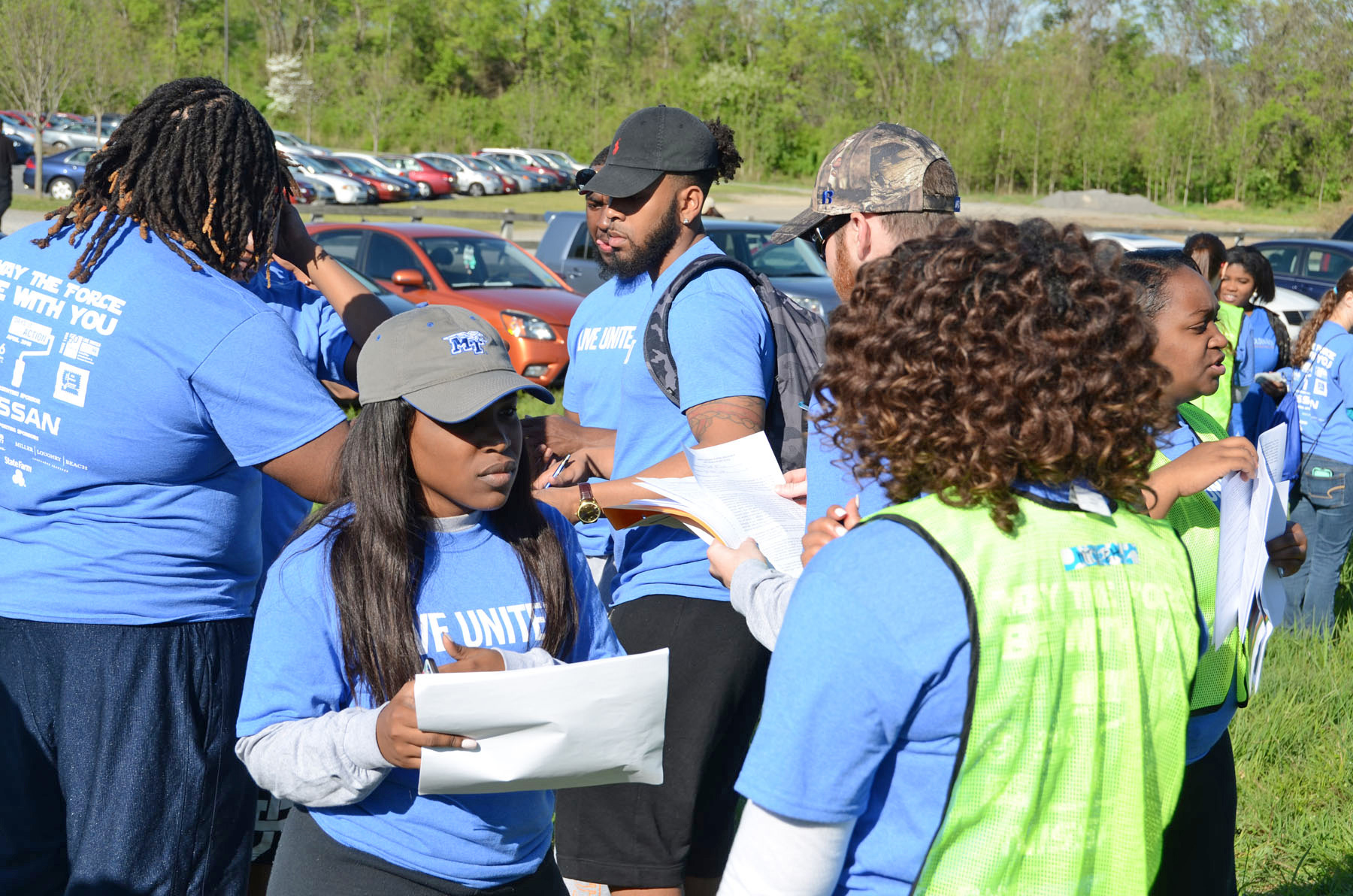 MTSU students made sure a heavily used local green space was covered in blue over the weekend as dozens volunteered to do their part for this year's BIG Event at Old Fort Park.

One of the nation's largest one-day community service projects involving college students, this year's BIG Event was held Saturday (April 16) in conjunction with the National Park Day centennial, with volunteers helping to cut down invading flora, plant new trees and remove trash from the area around Old Fort Park.

The MTSU Student Government Association, Center for Student Involvement and Leadership, MTSU Stormwater Program and the United Way of Rutherford and Cannon Counties were among key partners for the event, as well as the city of Murfreesboro and the Stones River National Battlefield.

Hundreds of MTSU students have participated in the BIG Event for the last several years, helping the community by painting and cleaning buildings, delivering meals to senior citizens, building a children's play area and organizing donations for a local mission.

MTSU student Myeshia Burchett, a senior nursing major from Memphis, Tennessee, and SGA's philanthropic coordinator, said this year the SGA decided that rather than having students spread throughout the community for multiple events, students would come together to focus on a single activity "to have a bigger impact."

"I love serving and have always been very involved in the community," said Burchett, who spent the morning making sure students registered, filled out liability forms and were assigned to their proper crew leaders.

Student volunteers then joined other community volunteers in Saturday's cleanup, with more than 400 people participating. The result was almost 9,000 invasive plants cut and treated, 65 pounds of trash removed and 246 trees planted.

Freshman Austin Hardy, a marketing major from White House, Tennessee, joined a group of several friends dispersed among about 200 MTSU student volunteers. Admittedly not a big fan of community service while in high school, Hardy is glad that MTSU has provided opportunities for him to give back.

"It's kind of cool helping out the community," he said, sporting the blue "Live United" T-shirt handed out to all student volunteers. "It gives students a bigger picture ... that it's not just all about me. Instead of just living my own life and doing my own thing, to help out people, and not just people, but the Earth too."

Jackie Victory, director of the Office of Student Organizations and Service in the Division of Student Affairs, said such events are a key part of MTSU's Connection Point program, which awards students with a series of buttons for their participation in campus activities.

"Connection Point is all about getting our students to get engaged and be apart of the campus life and the campus culture that we have," Victory said.

SGA President Lindsey Pierce has participated in the BIG Event since her freshman year, previously serving as a site leader.

"I think it's important for the students to give back to the community that they're surrounded by," she said. "I mean they give so much to our campus as it is."

Cynthia Allen with the Stormwater Program explained to students that the cleanup would help protect the water flowing into Lytle Creek, which runs through a portion of Old Fort Park and is part of the Stones River Watershed.

"We're trying to protect the waterways for recreation and wildlife," she said. "The volume of work couldn't happen without the volunteers, so we're very thankful for you."