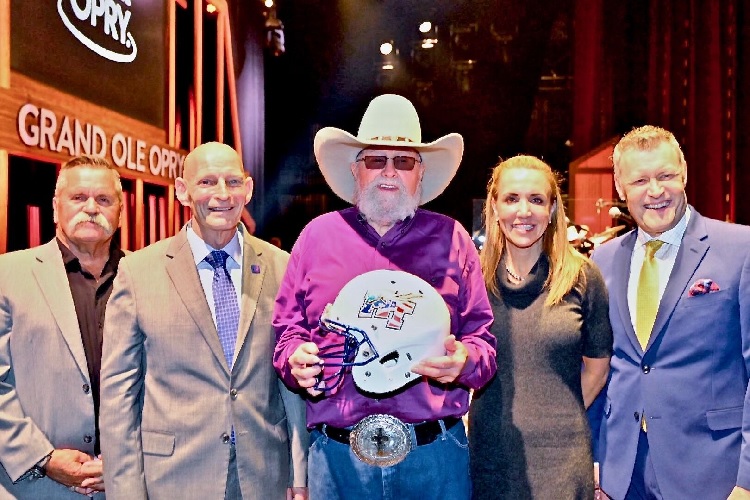 Charlie Daniels, center, shows off his new Blue Raider Football helmet given to him by MTSU's Keith Huber, left of Daniels, and Hilary Miller, right of Daniels, after a surprise presentation at the Grand Ole Opry in Nashville, Tenn. In on the surprise was Daniels' long-time manager David Corlew, far left, and Opry announcer Bill Cody, far right. (MTSU photo by Cat Curtis Murphy)

Charlie Daniels was getting ready to bring down the house at the Grand Ole Opry with his signature song, "The Devil Went Down to Georgia," when announcer Bill Cody interrupted with a surprise for the country music icon.

"Ladies and gentlemen, Charlie and his wife, Hazel, are the namesakes and patrons for a very special place on the campus of Middle Tennessee State University: The Charlie and Hazel Daniels Veterans and Military Family Center," Cody told the Opry House audience on Oct. 15.

"Thanks to the support and generosity of Charlie, the Daniels Center has become one of the nation's top academic support centers for student veterans, and the family members of veterans, seeking to use their hard-earned benefits in pursuit of higher education," he continued. "Please welcome to the stage, from MTSU, retired Army Lt. Gen. Keith Huber and Daniels Center Director Hilary Miller."

With that, Huber and Miller appeared from backstage and presented Daniels with a Blue Raider football helmet, sporting the red, white and True Blue MT logo that the team will wear for its annual Salute to Veterans and Armed Services game on Nov. 16.

You can see a video of the surprise here: https://youtu.be/fZ-sC1b4H3A

"I had the privilege to serve 38 years of my life on active duty as an infantryman and Green Beret," Huber told the Opry audience, which gave him a standing ovation when he appeared. "I consider it my privilege to be at the side of this great patriot and my great friend."

Daniels was overwhelmed by the surprise, as well as the emotional response from the audience. "This is what America is about, right here in this building," he said afterward.

Just before Cody interrupted the show, and unaware that Huber was about to deliver the surprise, Daniels spoke at length about the "unpayable debt of gratitude" owed to our veterans and active duty troops.