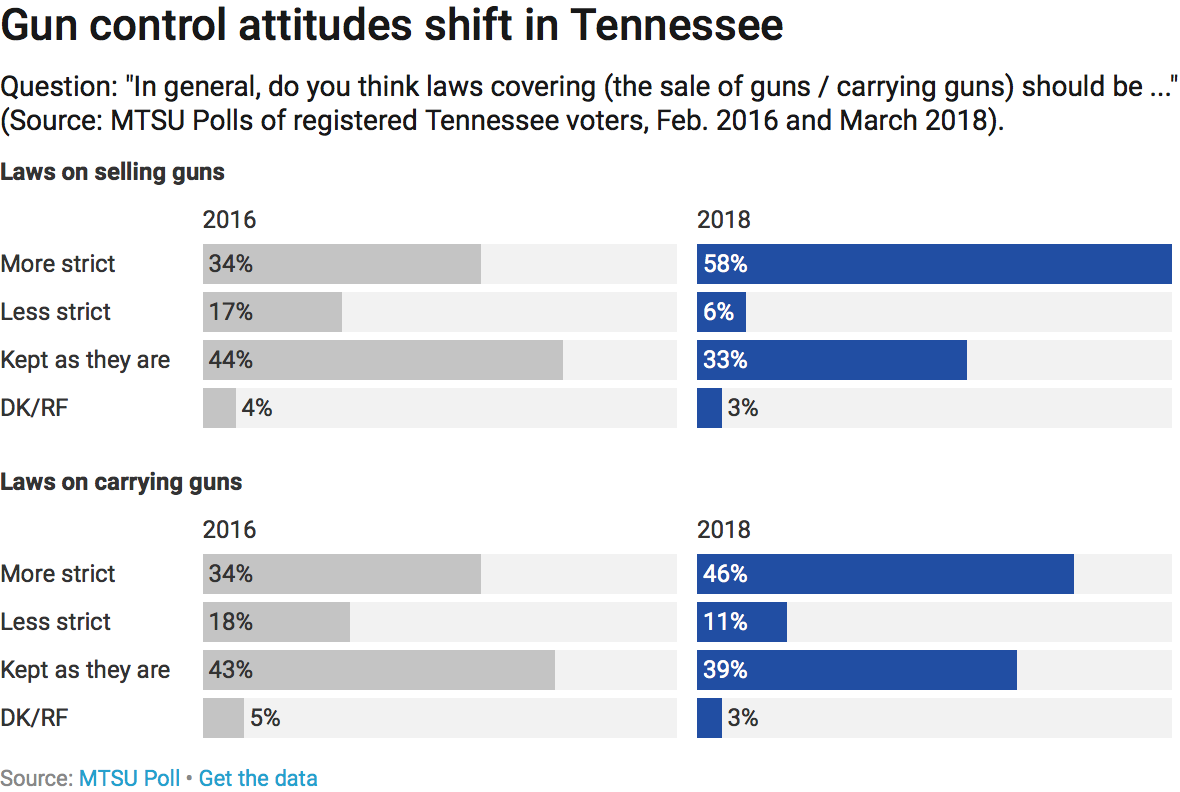 Support for stricter laws on gun sales has jumped to 58 percent among Tennessee registered voters, according to an MTSU Poll taken during the same week as the "March for Our Lives" demonstrations in Washington D.C. and around the country.

The latest level of support represents a 24-point climb from the 34 percent support measured two years ago using the same question. Support for stricter laws on carrying guns has risen, too, from 34 percent two years ago to 46 percent now, a rise of 12 points.

"It remains to be seen how enduring these opinion shifts will prove to be," said Dr. Ken Blake, director of the poll at Middle Tennessee State University. "But they are notable all the same, given their size, the speed with which they occurred, and the fact that they happened in a state where, as other findings from the same poll show, most voters still approve of the National Rifle Association, and about half favor letting teachers and administrators carry guns on school grounds."

Meanwhile, in findings related to another recent, high-profile protest movement, the poll found that 55 percent of state voters think recent allegations of sexual harassment and assault made against prominent men in entertainment, politics and media reflect "widespread problems in society" rather than "isolated incidents of individual misconduct."

The scientifically valid telephone poll of 600 randomly selected registered Tennessee voters was conducted March 22-29 and has an error margin of 4 percentage points.

Asked, "In general, do you think laws covering the sale of guns should be made more strict, less strict, or kept as they are now?"

◙ 58 percent answered "More strict," up 24 points from 34 percent in 2016, the last time the MTSU Poll included the question.

◙ The rest said they didn't know or declined to answer the question. All changes are greater than the poll's error margins.

Asked the follow-up question, "What about carrying guns? In general, do you think laws covering carrying guns should be made more strict, less strict, or kept as they are now?"

◙ The rest gave no answer or didn't know. The latter two changes fall within the poll's error margins.

"The 'March for Our Lives' demonstrations may have prompted a sudden change in Tennessee opinion toward laws governing selling and carrying guns, or this change might have developed more gradually during the two years since our last poll on the topic," said Dr. Jason Reineke, associate director of the poll.

In other findings, a 55 percent majority of Tennessee voters think recent allegations of sexual harassment and assault made against prominent men in entertainment, politics and media reflect "widespread problems in society." Only 33 percent see them as "isolated incidents of individual misconduct."

Broken down by gender:

◙ 59 percent of women see the allegations as evidence of societywide problems, significantly more than the 50 percent of men who give the same answer.

◙ Only 28 percent of women - and a significantly greater 37 percent of men - see the allegations as stemming from isolated, individual misconduct.

◙ About 13 percent of both groups don't know or don't answer.

The scientifically valid poll of 600 registered Tennessee voters reached by Issues & Answers Network Inc. interviewers via randomly selected cell and landline phone numbers. The poll is supported by MTSU's College of Media and Entertainment as well as by the School of Journalism and Strategic Media.

For more information and for previous poll results, visit http://mtsupoll.org.