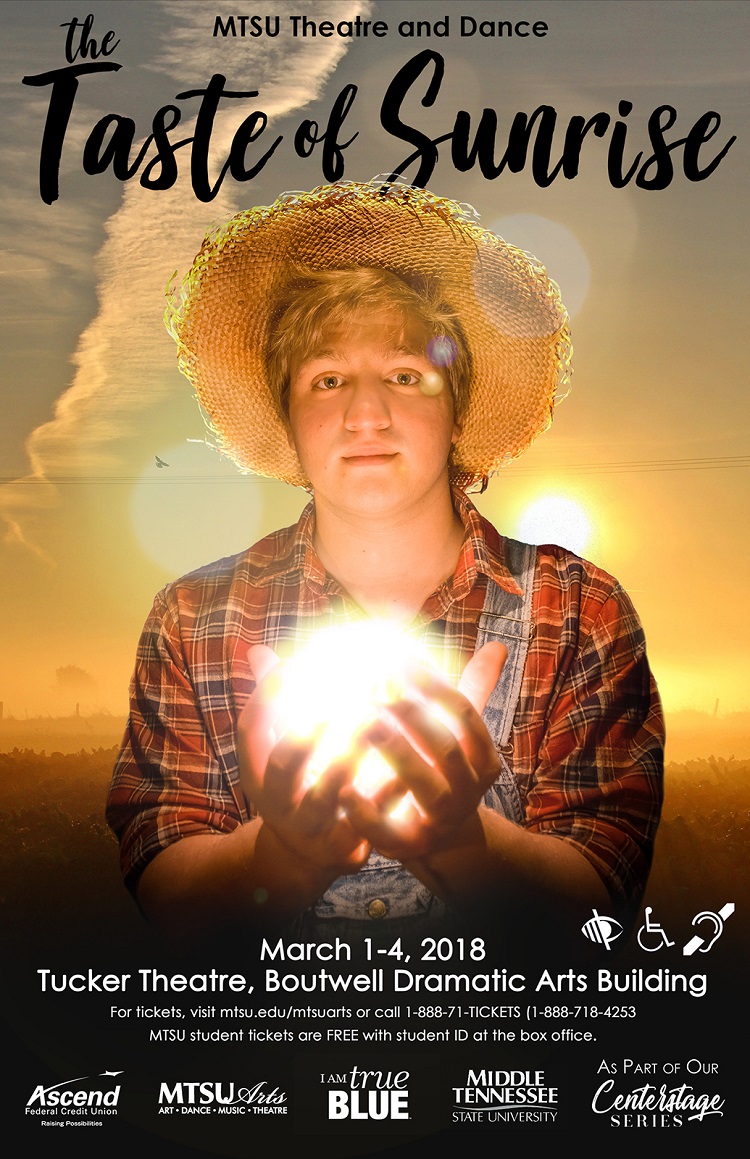 MTSU Theatre performers are becoming bilingual for their March 1-4 production, "The Taste of Sunrise,"creating an eloquent and multifaceted presentation that incorporates American Sign Language into the story of a man's adventure-filled life.

"The show is beautifully written for both English and ASL. It's about people who need and want to connect and a culture that makes it difficult," explains director Jette Halladay, an MTSU Theatre professor whose own adventures with students have taken her around the world to share stories through drama, comedy, music and art.

"It's about people who, in an effort to help, make choices that hurt. And it's about forgiving, reaching out and being willing to persist in forging bonds that last through the difficult times. Ultimately, it reminds us we are never alone. We are supported and connected in unseen ways."

Curtain times in the university's Tucker Theatre are 7:30 p.m. Thursday-Saturday, March 1-3, and 2 p.m. Sunday, March 4. Advance tickets, available at http://www.mtsuarts.com, are $10 general admission and $5 for seniors 55 and older and K-12 students. MTSU students will be admitted free with a current ID.

The award-winning play by Susan Zeder is set in the 1920s and follows a deaf man called Tuc, portrayed by MTSU junior theatre majorRobbie Ramirez, as he recalls the adventures, discoveries and people met along his life's journey.

"So far every rehearsal has been rewarding," says Halladay. "I'm moved to laughter and tears and gratitude. This is a remarkable script with honest and engaging actors."

Ramirez and his fellow cast members have spent the last several months learning American Sign Language and noticing the differences between it and spoken English. Dr. Angela Scruggs, a counselor at AGAPE Nashville who works with clients with hearing impairments, and some members of the deaf community also have worked with the "Taste of Sunrise" cast and crew to help them learn more about the population.

"ASL has an amazing way of communicating everything you need in just a few simple gestures," Ramirez says. "I hope this show will inspire a few people to pick up some basic ASL so that they can communicate with a wonderful group of amazing people."

Characters in the show who use sign language have "interpreters" to speak their lines, creating an opportunity for both the cast and the audience to understand both languages. The performances also will feature two screens with closed-captioning in Tucker Theatre.

Tickets also will be available at the Tucker Theatre box office one hour before curtain times. For more information about the show, visithttp://www.mtsuarts.com.