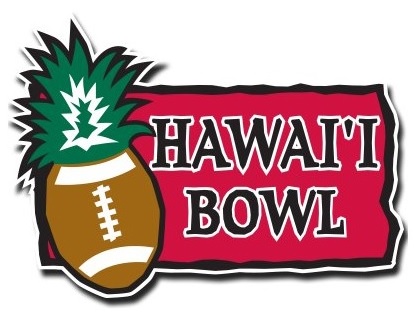 The Middle Tennessee Blue Raiders are going to their sixth bowl game in the Rick Stockstill era and third in the last four years. The HAWAII BOWL will place the Blue Raiders against the Hawaii Rainbow Warriors with the kick off at 7:00PM Christmas eve (Murfreesboro Time) from Aloha Stadium in Honolulu, and yes--you'll hear it on WGNS (AM 1450, FM 100.5 and FM 101.9). Play-by-play announcer Chris Walters says the pre-game coverage on WGNS begins at 5:30PM (12/24/2016).

MTSU Director of Athletics Chris Massaro said, "We realize the distance will make it difficult for many of our loyal fans to attend but hope they support our bowl effort by purchasing tickets and we will donate them to local Hawaiian Charities.

The Blue Raiders are representing Conference USA in the 15th annual Hawai'i Bowl on Dec. 24, 2016. It will mark the sixth bowl game of the FBS (I-A) era for Middle Tennessee and the 10th bowl game in school history.

Tickets to the game are $45 and will also include a complimentary Hawaii Bowl t-shirt and a ticket to a 2017 C-USA home game at Floyd Stadium. Tickets are now on sale by visiting www.GoBlueRaiders.com.

"I have spoken with the athletic director at Rice who earlier in his career attended the Rose Bowl and Fiesta Bowl with Stanford and he puts the Hawaii Bowl experience right with those bowls," said Massaro. "It will be a first-class experience for our student-athletes and fans that are able to make the trip so we are very excited about the opportunity and to compete against Hawaii."

The Hawai'i Bowl is known for its high scoring (the winning team has scored 40 or more points 10 times), thrilling offenses and close games with two overtime contests and five games decided by one touchdown or less. With a rich history, the bowl game has seen the likes of Notre Dame, Arizona State, Houston, Boise State and East Carolina.

MTSU Head Football Coach Rick Stockstill said, "We are honored to be representing Conference USA in the Hawaii Bowl. This is a once in a lifetime destination and I know our guys are extremely excited and can't wait to get on the island."

"This will be the third bowl game for our senior class and the fifth straight year of reaching bowl eligibility and that is a testament to their work ethic and consistency. This team has fought through a lot of adversity this season and to be rewarded with a bowl game of this magnitude is well deserved."

The Blue Raiders (8-4) enter the postseason riding a two-game winning streak and winning four of their last six. The Blue Raiders went 5-3 in C-USA play and upset SEC foe Missouri on the road out of conference.

Fans need to purchase tickets through the Middle Tennessee ticket office by calling 1-888-YES-MTSU or logging onto GoBlueRaiders.com.

The Blue Raiders will return to practice on either Thursday or Friday (Dec. 8-9) and will leave for the bowl game on December 18th.

For all the latest information on the Blue Raiders' bowl trip, please visit Blue Raider Bowl Central on GoBlueRaiders.com.

On Sunday, the Blue Raider football team was invited to play in the 15th annual Hawai'i Bowl vs. the hometown Hawaii Rainbows of the Mountain West Conference.

Tickets to the game are $45 and will also include a complimentary Hawaii Bowl t-shirt and a ticket to a 2017 C-USA home game at Floyd Stadium. Tickets are now on sale by visiting www.GoBlueRaiders.com.

Additionally, all seats will be will call only, and available for pick up at the Blue Raider ticket office, located at Gate 1A of Floyd Stadium starting Monday, December 12, or at Aloha Stadium on the day of the game.

All seat/ticket assignments will begin on Friday, December 9, 2016.

BRAA members and season ticket holders will have first priority when it comes to ticket allocation based on the BRAA priority point system.

If you are unable to attend the bowl game, you can still support your Blue Raider football team with a bowl ticket purchase from the MTSU allotment. Your souvenir ticket and t-shirt can be mailed or you can donate your ticket to be provided to local youth charities in Hawaii.

For fans and corporate sponsors wanting to support the Blue Raider football team, there are several options with great incentives including official Hawaii Bowl pull-overs, footballs and team issued helmets.

Don't miss out on this incredible opportunity to cheer on your Blue Raiders during their bowl appearance in the Hawai'i Bowl December 24 at 7:00 p.m. CT.

Keep checking www.GoBlueRaiders.com/BowlCentral for the most up-to-date information.