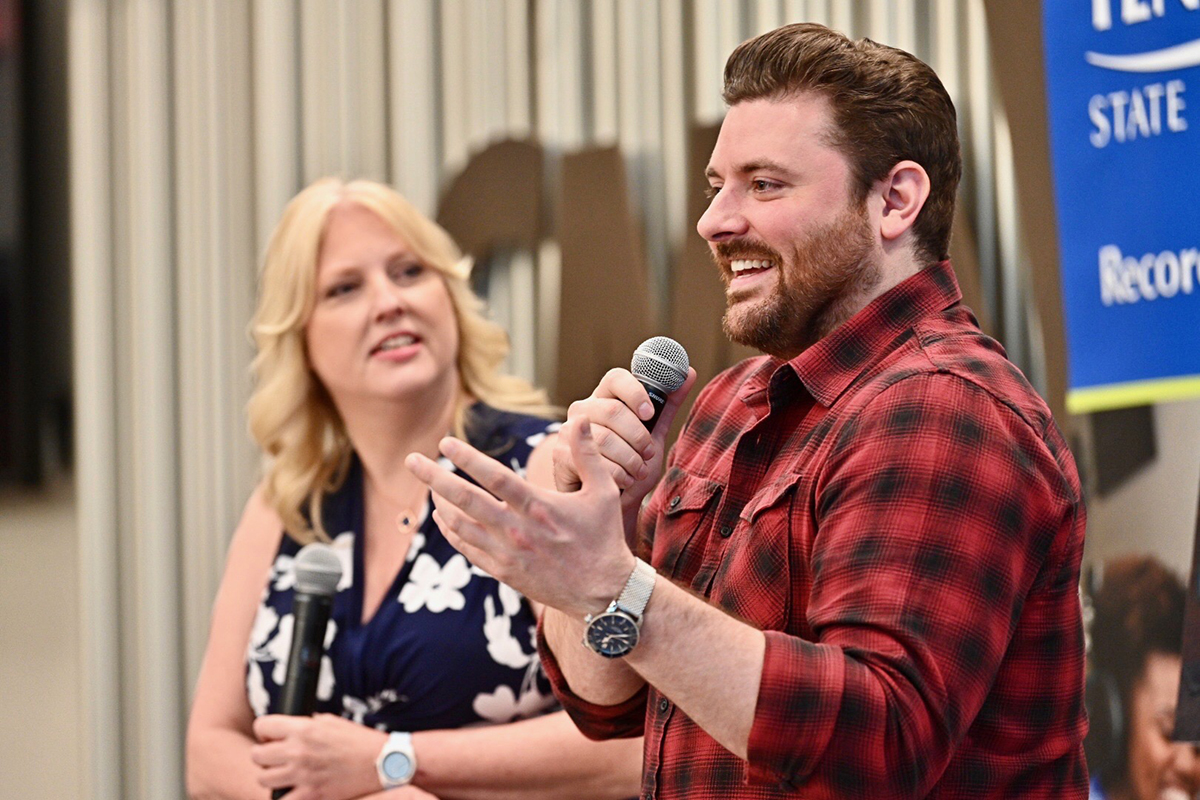 A new live entertainment venue on the Middle Tennessee State University campus will be named the Chris Young Café to honor the multiplatinum Nashville entertainer's continued support of his alma mater.

MTSU President Sidney A. McPhee, at an event Tuesday, July 9, at the Country Music Association headquarters on Music Row, thanked Young for lending his name -- and giving $50,000 -- for the venue.

The cafe, located in a standalone dining building and surrounded by residence halls, will be a teaching and practice place for student performers and technicians during the day and a performance venue at night for music, radio broadcasts, comedy and other entertainment.

"The Chris Young Café will encourage our students to dream bigger," McPhee said. "Chris studied at MTSU and then launched a successful music industry career, so every time they see his name on the cafe, their aspirations will seem a little more obtainable if they follow in his footsteps and work as hard as he has."

Young, who attended MTSU in 2005, has an impressive list of accomplishments, including membership in the Grand Ole Opry, 2 billion on-demand streams, 12 million singles sold and 11 career No. 1 singles. He has two Grammy nominations as well as award nominations from the Country Music Association and Academy of Country Music.

A global ambassador for country music, Young has maintained his True Blue ties to the Murfreesboro campus, funding an annual scholarship for recording industry students in 2016 and donating a selection of his touring audio equipment in 2012.

"MTSU will always hold a special place in my heart," Young said. "It helped me launch my music career and I'm glad for the opportunity to give back to the university."

Located in the Woodmore Building on the south side of campus and formerly known as the Cyber Café, the MTSU facility has 3,200 square feet of community and dining space with two raised platform stages. The space is surrounded by windows, allowing for natural light, and is an easy walk from the Bragg Media and Entertainment Building.

The College of Media and Entertainment began managing the performance space last year, when faculty from the Department of Recording Industry began readying the cafe for shows.

Media and Entertainment Dean Ken Paulson said the college is "grateful to Chris for giving our students this hands-on opportunity to learn."

"When you're teaching students how to manage, book and promote a concert hall, club or theater, having a working venue on campus is invaluable," Paulson said.

"His generosity will allow our students to gain real-world, hands-on experience in performing and live sound," Keel said. "He is a wonderful role model for our students, not only because of his success but because of his desire to continually give back and help others."

Young has given fans seven studio albums in 12 years, including "Losing Sleep," his third project in less than two years. The title track is certified platinum, while the second single, "Hangin' On," is his ninth No. 1 as a songwriter. "Losing Sleep" (2017) and "I'm Comin' Over" (2015) debuted at No. 1 on Billboard's Top Country Albums Chart, and "I'm Comin' Over" became Young's first double-platinum single.

Billboard earlier this year named MTSU's recording industry department to its annual list of America's top music business schools for the sixth time, once again joining its counterparts across the country as top producers of ready-to-work music industry pros.

The trade magazine bragged on several MTSU alumni and noted that the recording industry program was featured in an NBC Nightly News report that aired on Grammy night, along with a mention of MTSU's now-sixth annual Grammy Week trip connecting students and staff with area alumni and industry professionals.

Alumni, former or current students, and faculty from across the university have been a part of more than 60 Grammy Award nominations in the last two decades. Since 2001, nine have won a total of 28 Grammys, including six repeat recipients, in categories from classical to country to gospel.