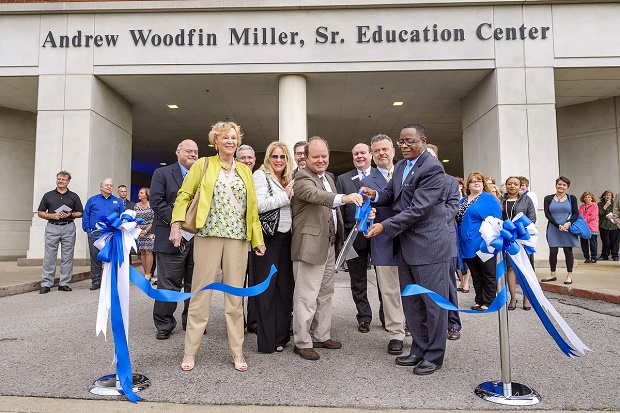 Andrew "Andy" Woodfin Miller Jr. gives remarks during the open house and ribbon cutting held Monday, March 14, at the Andrew Woodfin Miller Sr. Education Center at 503 E. Bell St. The facility is named in honor of Miller Jr.'s father, who donated $10 million to his alma mater in 2012. Miller Sr. was unable to attend the event. (MTSU photo by J. Intintoli)

MTSU held the public unveiling of the Andrew Woodfin Miller Sr. Education Center on Bell Street, a renovated campus addition that provides needed office and instructional space for some of the university's key programs.

The building was dedicated Monday in honor of Andrew Woodfin "Woody" Miller Sr., an MTSU alumnus (Class of 1966) and Nashville businessman whose record $10 million individual donation in 2012 made the subsequent purchase of the former hospital building possible.

New building occupants include the Jennings A. Jones College of Business Center for Executive Education, the University College, the Center for Counseling and Psychological Services, and the new Center for Chinese Music and Culture. In addition, there are satellite offices for University Police and Events Coordination.

MTSU President Sidney McPhee says the addition not only expands the campus footprint, it provides a dedicated space for the university's educational and outreach efforts to the business community and community at large. He adds it also provides much needed space for our University College, and also provides classroom space and faculty offices that are in great need and demand on our campus.

In spring 2013, the university bought the three-story building and property near downtown Murfreesboro previously owned by the former Middle Tennessee Medical Center (now St. Thomas Rutherford Hospital). The purchase has allowed the university to relocate off-campus offices such as University College closer to the core campus.

McPhee gave special thanks to Miller's relatives, Bubba and Kay Woodfin, for their support in helping secure to donation from Miller, who McPhee praised as a man "that understands the importance of making a difference in the lives of people."

McPhee noted Miller's previous support in 2001 to complete the necessary matching funds for the University Honors College building followed by the "truly transformational" gift more than a decade later for the Centennial Fundraising Campaign that allowed purchase of the Bell Street property.

The center is an approximately two-minute drive from the western edge of campus, located between Greenland Drive and Bell Street at Highland Avenue. It includes 126,839 usable gross square feet of space, 50 faculty/staff offices, seven classrooms, two conference rooms and six multipurpose rooms. Expansion space on the third floor will allow for future growth.

Although Miller Sr. was unable to attend Monday's ribbon cutting, his sons Andrew "Andy" Miller Jr. and Tracy Miller, a former MTSU English professor, attended on his behalf. Miller Jr. told the crowd that his father was "a smart, very thoughtful businessman" who wanted to do something special for his alma mater.

"He knew that he wanted to do something that would change the university in ways that were very positive," the younger Miller said. "This facility is everything and more."

A $6.5 million renovation project was completed this spring that included upgrades to second floor meeting space, lighting upgrades in the parking garage, new lighting in the surface parking lots, and new fencing around the green space south of the building.

The upgrades to the second floor meeting space adjacent to the central atrium will accommodate flexible seminars for 60 occupants, or approximately 145 occupants for special events.

"A great university is a great cultural, economic and social transformative engine for its population," Bartel said. "That's what we're doing for Murfreesboro and for the Middle Tennessee region."