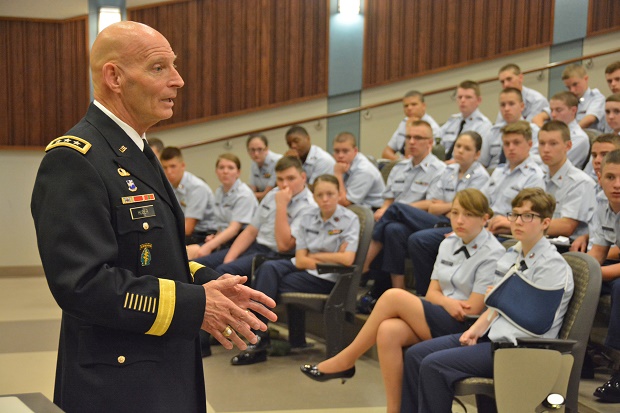 The cadets, ranging in age from 12 to 21, are living in campus residence halls, attending special presentations by the university on aerospace and leadership and learning military drill and customs during the encampment.

It is the first time Tennessee Wing has held its annual training for cadets on a university campus. The Department of Aerospace is the host of the encampment and its faculty will train cadets on MTSU's 360-degree air traffic control simulator, as well as equipment at the aerospace campus at the Murfreesboro Airport.

"I'm hoping cadets take away a different experience from encampment being at MTSU, as this is definitely not like previous encampments at military bases," said Cadet Lt. Col. Jonah Torp-Pedersen of Spring Hill, the senior cadet commander. "It offers a wide variety of opportunities, especially in the aerospace department."

One of those opportunities was a lesson in leadership and service from retired U.S. Army Lt. Gen. Keith Huber, MTSU's senior adviser for veterans and leadership initiatives, who spoke to cadets Monday.

Huber also used the occasion to mark the 72nd anniversary of D-Day, the Allied invasion of Europe in World War II, recalling the bravery and courage of the service members who fought in that pivotal conflict.

Huber challenged cadets to remember that by wearing the Air Force uniform, a privilege granted to CAP because of its status as the service's volunteer civilian auxiliary, that they must also represent the values and ideals of the armed forces.

"Why do you wear this uniform? Why do you sacrifice part of your individuality to learn about teamwork and learn about leadership," Huber asked.

Lt. Col. Jeff Clark of Knoxville, the encampment's senior adult leader, said 60 of the cadets at this year's training are first-time attendees. Twenty-five cadets are returning as staff members and 10 are part of an advanced program, which will include a day trip to nearby Fort Campbell for skills and simulator training.

"Encampment does three things: it's necessary for promotions for cadets to become officers, it gives us an opportunity to standardize things across the state and it allows cadets to get experience with large-scale leadership," Clark said.

For the university, it affords an excellent opportunity to welcome prospective students to campus, said Andrew Oppmann, MTSU vice president for marketing and communications.

"We appreciate the chance to host so many excellent young men and women and give them a chance to see all the great academic programs our university has to offer, including, of course, our aerospace department," Oppmann said. "It's a real win-win partnership."

Some of the cadets at the encampment are already True Blue. Cadet Lt. Col. Josh Brinegar of Hohenwald, the second-ranking youth officer, will attend MTSU in the fall as one of the new class of Buchanan Scholars, the university's highest academic award. He will major in concrete industry management.

Cadet Capt. Justin Kuroski, a Georgia Wing cadet attending the Tennessee encampment, will be at MTSU this fall as an aerospace administration major with a minor in air traffic control.

"I saw the email back in February with the announcement that encampment was going to be held at MTSU and I immediately said, 'Mom, I'm applying here again,'" Kuroski said.

Cadet 1st Lt. Joshua Williams of Smyrna is already a junior at MTSU, majoring in criminal justice administration and a member of Army ROTC. He said this will be his final encampment for CAP.

"I'm looking forward to training my replacement, making sure the cadets have the right command and the biggest goal is for them to achieve excellence and bring that to their squadrons, schools and homes," he said.

CAP, organized just days before the 1941 attack on Pearl Harbor that propelled the U.S. into World War II, will celebrate its 75th anniversary this year. Its national conference will be in Nashville this August.

It is an all-volunteer organization with about 56,000 members nationwide and 1,000 in Tennessee. They are best known for their emergency service duties, including 90 percent of the continental U.S. inland search and rescue missions, its cadet program and its support of aerospace education.