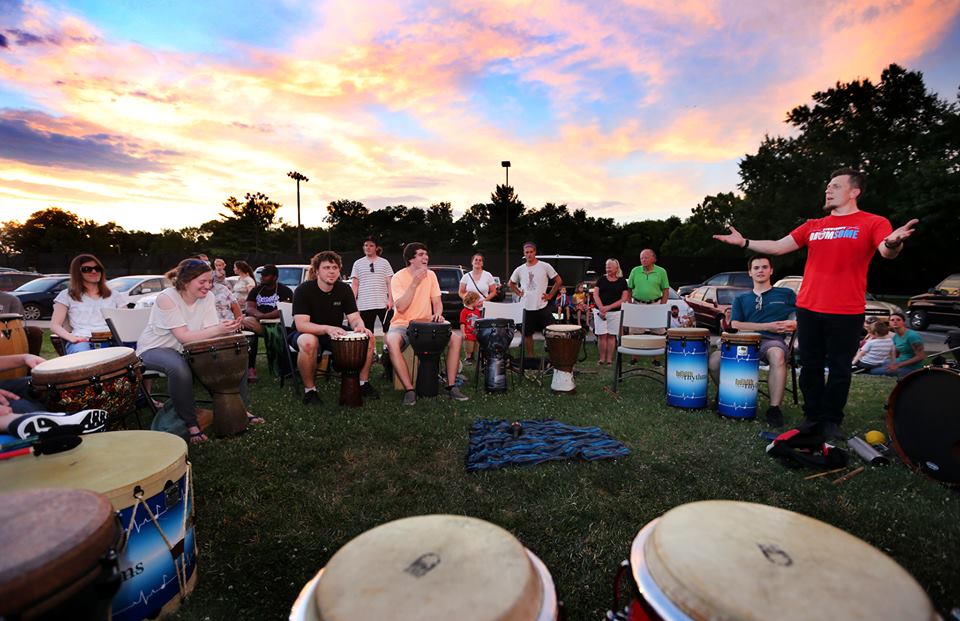 Everybody Drum Some plans another Murfreesboro Community Rhythm Event.

Anyone who would like to participate in a group drumming session can come to the brick area at the east side of the Rutherford County Courthouse right in the center of the city, beginning at 6:30 p.m., Thursday, Sept. 22, the autumnal equinox.

Rhythmists can bring djembes, congas, shakers, hoop drums, tambourines or their percussive instrument of choice. Everybody Drum Some will provide instruments and seating for those who want to join but don't have anything to bring.

Ross Lester even invites those who may not wish to drum to come out and watch and hear the spectacle, a group of people, many of whom have never met each other, coming together to create a new piece of collaborative percussive music.

"It's an important freedom to peacefully gather and engage in civic life," says Lester, a Murfreesboro drum instructor and group rhythm leader. He also brings his Drum Disciples to the sidewalk near Concert Musical Supply each Saturday morning simultaneous to the Saturday Market on the Square, and leads rhythm events at the VA.

A scientific study conducted in the U.K. released earlier in 2016 explored whether general music making within community settings can enhance mental health and well-being.

So, the effects of group drumming can be positive and long-lasting.

To Lester, such a rhythm event is much more than a bunch of individuals smacking drum heads to make noise.

"It is exemplary of society as a whole," Lester said of a drum circle.

These group rhythm events can indeed offer a chance for plenty of personal artistic expression and freedom, but Lester spoke of the importance of listening to what those surrounding you are saying, and of being conscious that your part doesn't infringe upon the rhythm of the community.

Unplug and drum with others at a Community Pulse Rhythm Event on Thursday, Sept. 22, at the Courthouse.

Find an event page at tiny.cc/drumsept22.