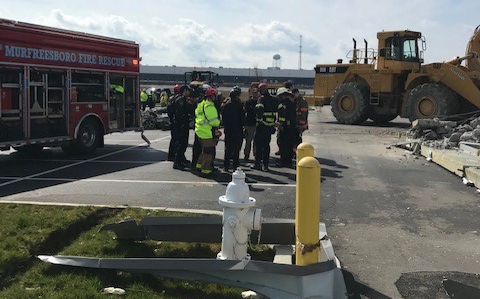 Murfreesboro, Tenn. - Murfreesboro Fire Rescue Department (MFRD) responded for mutual aid in the aftermath of a devastating tornado that hit Wilson County and other parts of Middle Tennessee Tuesday, March 3.

Wilson County Fire & Rescue requested assistance from MFRD at about 3:30 a.m., Tues. morning. Engine 2 and Ladder 8 responded to the Lebanon area with four personnel each.

Later, Mt. Juliet Fire and Police Departments requested assistance from MFRD. Rescue 1 and personnel with a Structural Collapse trailer from Station 1 responded and conducted searches for victims in the Mt. Juliet area. Crew members searched a home and later a warehouse in Mt. Juliet.

"It's about neighbors helping neighbors," said MFRD Chief Mark Foulks. "We didn't hesitate to respond when called upon. No fire service is fully equipped to deal with natural disasters or major emergencies."

The units have returned to Murfreesboro after completing their requested support assignments.