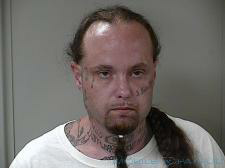 A Murfreesboro man who goes by the nickname of "Bubba" was arrested and charged for the 7th time with "Driving on a Revoked License." The suspect was arrested on Wednesday morning at 8 near two local schools.

Charles K. Irish was located by MPD on Fortress Boulevard passed out in his car, according to an arrest report. When police found Irish, he was asleep in the driver's seat of his Toyota with the engine still running and the car in gear. A glass bottle was in his lap when police approached the car.

Officer Skye Brown had to wake Mr. Irish up and Brown reported that Irish could not tell police what street he was on. It was confirmed through the National Crime and Information Center database that Irish had six prior "Driving on Revoked" convictions, one DUI conviction, a vehicular assault conviction and numerous other driving infractions.

After being arrested and transported to the local jail, Irish allegedly stated to police, "What can I Say, I'm addicted to driving drunk."

Brown was charged with his second DUI and for a seventh time with Driving on a Revoked License. He was booked under a $10,000 bond and scheduled to appear in court on December 6, 2016.