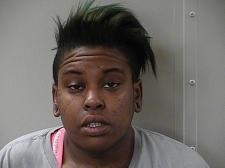 A Murfreesboro woman has been charged for the fourth time with DUI and for the third time with Driving on a Revoked License.

28-year-old Whitney Denise Johnson was arrested after an accident occurred on East Clark Boulevard around 5:00 Saturday night. A police officer reported, "Upon my arrival I made contact with Whitney D. Johnson who was in the driver's seat operating a motor vehicle and actively trying to leave the scene of the accident. I pulled my patrol car in front of her vehicle and stopped her from moving any further."

Police say that Johnson almost fell over after being asked to get out of her vehicle. Minutes later, she reportedly failed a field sobriety test. In addition to smelling like alcohol, Johnson told police that she took a Xanax pill four hours prior to the accident and also took a Seroquel earlier in the day.

Johnson was arrested and taken to the local jail where she was booked under her 4th DUI charge and her 3rd driving on a revoked license charge.

Prior DUI Cases for Johnson: