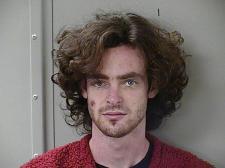 A 20-year old man who admitted to taking LSD was arrested at The Southern on Lascassas Pike. Murfreesboro Police Officer Eric Nelson reports being called there just before 1am Saturday and seeing the suspect, nude, in the parking lot.

Nelson reports when he asked Samuel Haas what he was doing, he replied "we are all molecules that are going to fly away." Eventually, after being asked a couple of times if there was anything he could do to help him, Nelson reports Haas said he would give the officer "everything he's got."

Taking that as a threat, the officer exited his vehicle and arrested Haas on a public intoxication charge. EMS took the man to the hospital, where he told the officer he'd taken two tabs of LSD. A toxicology report from the E-R also reportedly showed cocaine and marijuana in his system.

Haas additionally faces charges of simple assault and resisting arrest. He was taken to the Rutherford County Adult Detention Center and has since bonded out.