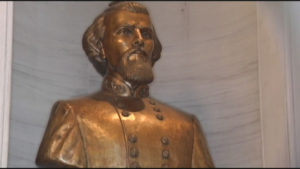 The Tennessee Capitol Commission has voted not to remove the bust of Nathan Bedford Forrest from the state capitol building.

The bust sits between the Tennessee House and Senate on the second floor of the state capitol.

It has been the target of protests for years. The latest push to remove it comes after violent protests started by white supremacists in Charlottesville, Virginia.

Opponents of the bust point to Forrest's involvement with the Ku Klux Klan -- he allegedly served as their first grand wizard -- and the fact that he made money as a slave trader.

Defenders of the bust say it commemorates the native Tennessean's role as a general for the Confederacy and removing it would be ignoring history. They also note after leaving the Klan Forrest advocated for civil rights.