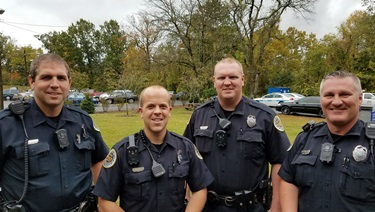 In nearby Nashville, the Metro Police Department is experimenting with officer body cameras.

As part of the research and development phase of designing an integrated body worn camera system specifically for the Nashville Police Department, 20 volunteer officers this week and next are beginning field trials of body worn cameras from four separate manufacturers. The first four officers received training on the same model camera this morning and are now wearing them in the field.

The first four officers with department-issued body worn cameras are:

Cameras from three other manufacturers will be issued to other volunteer officers in the coming days after they receive training on their operation. Feedback from the volunteer officers will be an important part of the process in determining which equipment is best suited for the men and women of the MNPD.

"Stage one of field testing that has begun today is part of the process to help ensure this police department makes the right decisions that are in the best interest of Nashville as we, over the coming months, work toward the establishment of a comprehensive body and in-car camera system," Chief Steve Anderson said.

Policy for the research and development phase of body camera evaluation calls for the volunteer officers to record their daily police activity, including vehicle stops, arrests, searches, observed criminal law violations, and the questioning of suspects or witnesses. An individual's privacy or dignity may outweigh the need to record. Those include natural death scenes, death notifications, and interviews with children or sexual assault victims. Officers will make every effort to deactivate their cameras while in a patient care area of a health facility.

During the research and development phase, officers will download recorded video at their work stations at the end of each shift. The MNPD ultimately plans to have wireless hotspots in various parts of Davidson County to allow for the high speed downloading of video once fully integrated infrastructure for a body worn camera system is built and in place.