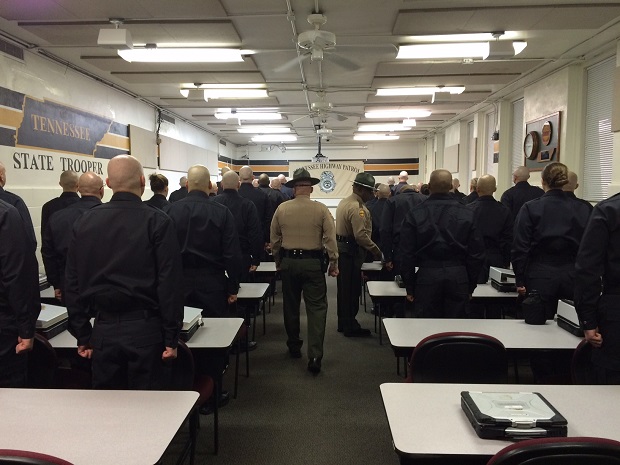 A group of 48 men and women took the first step on their path to become members of the Tennessee Highway Patrol. On February 1, 2016, these individuals reported for rigorous training as members of a new cadet class. Training will be conducted at the Department of Safety & Homeland Security Training Center, located on Stewarts Ferry Pike in Nashville.

THP Colonel Tracy Trott welcomed the cadet class saying, "I'm proud to welcome the new THP cadet class. This group of men and women were chosen from a very competitive pool of applicants. They will receive some of the best training in the country."

For 22 weeks, cadets will learn, train, and perform tasks proving that they are up to the challenge to become members of the THP. After training, the cadets will graduate and undergo 10 more weeks of field training.

"Our state troopers assume a lot of responsibilities, and they and their family members have to make a lot of sacrifices in service to the public. We are fortunate to have an excellent class of cadets who seek to join the ranks of state troopers," said Department of Safety and Homeland Security Commissioner Bill Gibbons.

There are currently 884 authorized commissioned officer positions within the THP. Once graduated, Trooper cadets will be assigned to vacant positions across Tennessee. Under the budget proposed by Governor Haslam earlier this week and now under consideration by the General Assembly, Tennessee's state troopers will receive salary increases to bring their salaries more in line with troopers in surrounding states. The Governor's proposed budget also includes funding for twelve (12) additional state trooper positions.