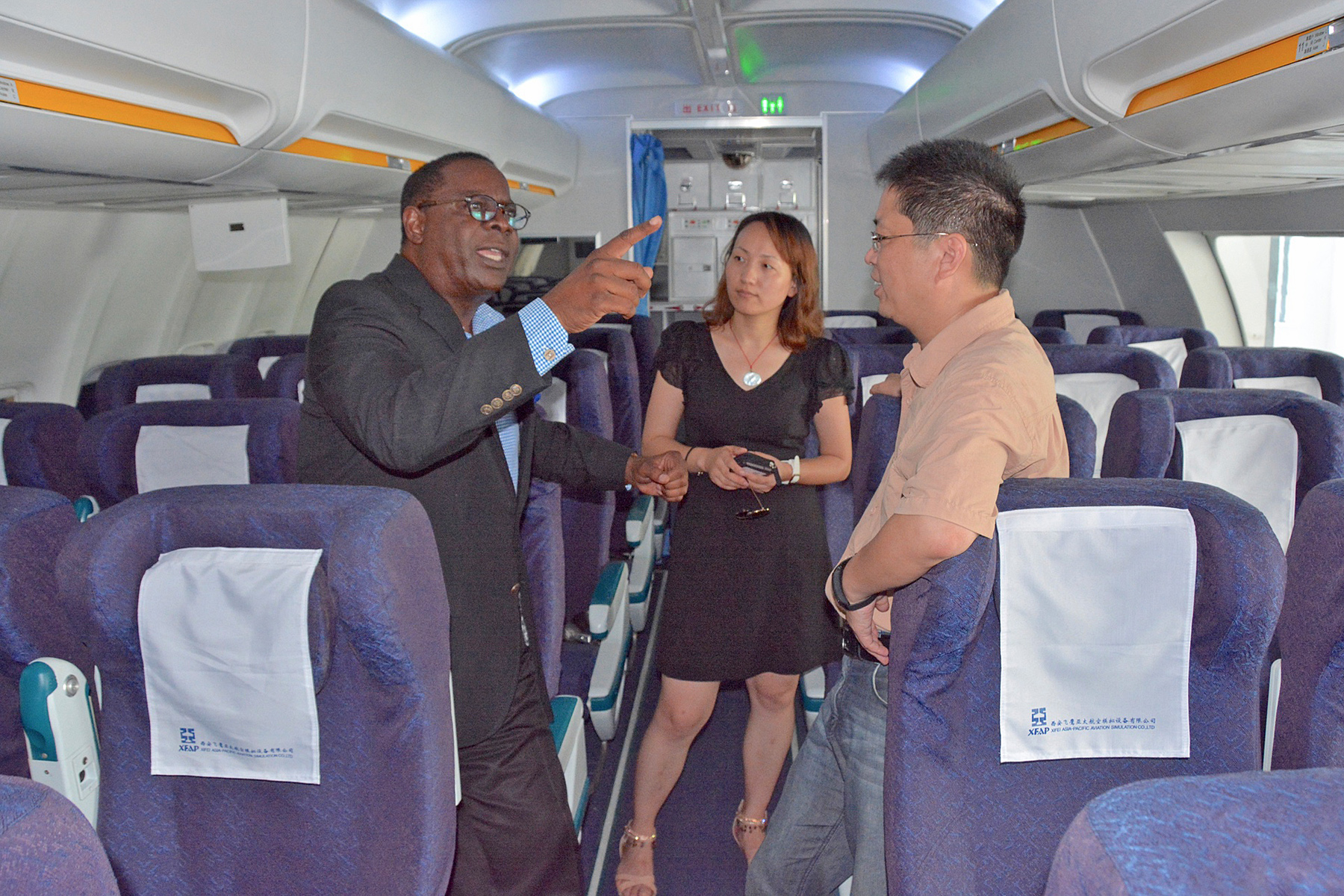 MTSU President Sidney A. McPhee tours the interior of a Boeing 737 cabin simulator on Wednesday, July 20, that the newly created Jiangsu Aviation Technical College in Zhenjiang, China, will use for student training when the institution opens this fall. (MTSU Photo by Andrew Oppmann)

Organizers of a China college opening this fall to help the country meet its demand for aerospace professionals approached Middle Tennessee State University on July 20th to form one of its first foreign partnerships.

MTSU President Sidney A. McPhee opened negotiations with Jiangsu Aviation Technical College in China's Jiangsu province, which will open its doors in September. The college hopes to link with MTSU for expertise in air traffic control and aircraft maintenance education.

China's central government is expected to open general aviation space to private enterprise, which will create a demand for aerospace facilities. Jiangsu officials anticipate as many as 500 airports will be built in the next five years -- and more than 3,000 will open within 10 years.

"It speaks to the international reputation of our Aerospace department to be asked to be one of the first partners of this new college," said MTSU President Sidney A. McPhee. "We look forward to exploring opportunities with Jiangsu as they prepare to welcome their students."

McPhee invited Sun Jia Zheng, a vice president of the college and a local economic development official for the region, to visit Murfreesboro this year to meet with the aerospace faculty and explore opportunities for collaboration.

"There will be so many new general aviation airports in China," Zheng said. "Construction isn't the hard work. We feel our key focus needs to be in the training for the operation of these new facilities, including maintenance and air traffic control."

Jiangsu will open this fall with an enrollment of 600 students and six aerospace degree programs. China's central government built the campus to handle many times that initial enrollment, with gleaming white marble buildings assembled in a large area in an aerospace research park.

McPhee toured several of the new college's facilities, including a Boeing 737 cabin simulator that will be used to train students on passenger safety and service.

"It's an incredible campus and it's well poised to serve the needs of China's emerging general aviation industry," McPhee said. "MTSU can help this college develop programs and processes it needs to help meet their needs."

McPhee is in China along with a 28-member delegation that includes several Rutherford County schoolchildren, parents and teachers who are part of a unique educational exchange organized by MTSU.

The delegation will visit classrooms, participate in enrichment activities and go with Chinese families for home visits as part of the reciprocal exchange with Dongcheng Education Group of Hangzhou Normal University.

MTSU's Confucius Institute, a joint effort between the Hangzhou and Murfreesboro universities, oversees the annual exchange. Families paid their travel expenses to China, but most housing and travel costs were covered by the institute and Dongcheng.