New items at the MTSU Floyd Stadium in Murfreesboro 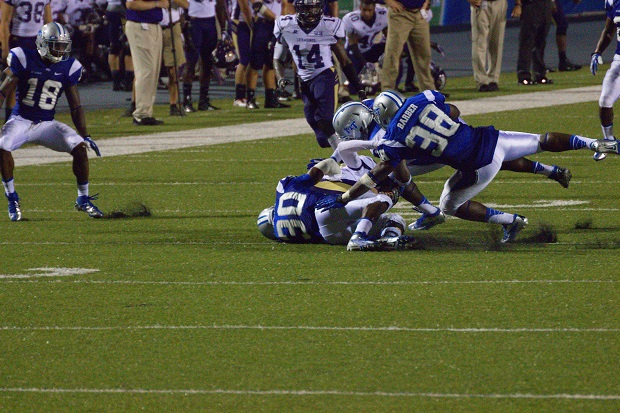 As Saturday's MTSU season-opening football matchup with Vanderbilt nears, Middle Tennessee is making fans aware of some fan experience changes in store for this season to better enhance the game day atmosphere at Johnny "Red" Floyd Stadium. You will not want to miss any of these Saturday night so make family plans now to have an incredible college football experience.

From a new look of the team and stadium to more concession options, better tailgate accessibility and a fireworks show mixed in, Saturday's game and all six of the Blue Raiders' home matchups will surely be packed with excitement and fun on the field and inside and outside the stadium.

Here are some enhancements in store for fans:

Shafer's slight change in defensive philosophy will have the Raiders playing with more aggressiveness this season alongside its record-setting offense. Head coach Rick Stockstill has also noted his defenders have done a fantastic job of getting better at the fundamentals of the game this offseason.

Not only will the defense look a little different schematically, but also all the players will have a slightly different appearance in their wardrobe.

Assistant Athletic Director for Equipment Operations Larry Maples unveiled new Nike uniforms this offseason, and the players aren't the only ones who've raved about the new look. Fans have also praised the jerseys for how crisp they look and how well the numbers stand out.

"People can really see the numbers from a distance," said Athletic Director Chris Massaro said. "That's something people mentioned that they wanted to see changed, and Larry Maples and our Nike team did a terrific job developing our uniforms."

Along with the new look of the football team, fans will see some different aspects on the physical stadium.

New ribbon boards, measuring a total of 300 linear feet, now line the north and east fascia on the bottom of the upper deck. The project, which cost $400,000, was funded through a capital subsidy in Middle Tennessee's contract with Learfield Sports.

The boards were manufactured by Daktronics, and they'll provide fans a great way to see stats, promotions, sponsors, scores and other content.

"We'll be able to use those to really create a new game atmosphere," Massaro said. "They can help engage fans in key moments of the game and also will deliver new content for sponsorships and messaging. We're really excited for that."

Patrons will also notice new lettering on the press box with bright blue letters, and after the Vanderbilt matchup a firework show will entertain all in attendance for about 10 minutes.

For those looking for some of the best food Murfreesboro has to offer, you can find it inside Floyd Stadium while you watch the Blue Raiders race up and down the field.

"We think fans will be excited about our new concession options," Kortne Gosha, associate athletic director said. "We have a lot of different options this year that are popular restaurants in our community."

Before fans get up to the gates to get into the game, plenty of fun will be available for all ages.

Tailgating spots will remain as they were last season, in the Greenland Drive parking lot lawn and outside the Wood-Stegall building along Alumni Drive. Both areas are free and available on a first-come, first-served basis, and Raider Town will also open at 4 p.m. near Gate 3 with vendors, food trucks, give-a-ways, inflatables and more.

An additional tailgate location will be available for the Vandy contest, Oct. 7's homecoming game and on Oct. 20 for Blue and White Level members and above only. Membership cards will be required for entry, and elevator access will be available.

Fans will also be able to enjoy the band Mixtape, a local 1980s cover band, in front of the Kennon Sports Hall of Fame in conjunction with the beverage garden that services season ticket holders and BRAA members. The area will be only for guests 21 and up, and the band will play from 4-6:30 p.m. and after the game.

When patrons are ready to venture to the game, Blue Raider Athletic Association checkpoints will be available in the parking lots and popular spots around campus with shuttles starting about three hours before gates open.

"Fans will see about a 20-foot large flag designating the BRAA pickup location in the Reese Smith lot, Greenland lot and kind of throughout the athletic corridor," Gosha said.

What you're allowed to bring into Floyd Stadium

Some aspects of Gameday in Murfreesboro are changing, but what you're allowed to take into the stadium is the same as it was during the 2016 season.

All bags 14-by-14-by-10 inches and smaller will be allowed, and every bag will be checked before patrons are allowed to enter. A list of impermissible items is included below.

Where can you park?

Traffic patterns and parking are also similar this season.

With the construction on Middle Tennessee Boulevard, patrons are encouraged to find an alternate route off of that road when available.

"With the construction on Middle Tennessee Boulevard, our advice is to avoid it altogether if possible," Gosha said. "We want everyone to get to the game in a timely manner to enjoy our game day experience, but safety is our main objective."

A place for everything you need to know

Information about parking, Floyd Stadium, personnel to know and other items are available for season ticket holders in the new Blue Raider season ticket booklets.

With all of the changes to operations for Blue Raider football games, patrons are asked to be patient with traffic and encouraged to have a fun and safe game day experience. For any questions or concerns, please contact the Middle Tennessee Ticket Office at 615-898-5261.

"We want people to really come out and embrace the game day atmosphere," Gosha said. "We have a lot of new features that we hope fans will enjoy as they come out and support our Blue Raider football team."

For reasons of safety, the following items are NOT PERMITTED in Floyd Stadium: