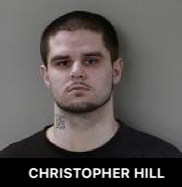 A Norman Avenue man, who was wanted by authorities on ten warrants, has been arrested by Murfreesboro Police.

Twenty-five year old Christopher Hill was arrested last Thursday afternoon just before 4 o'clock by Officer Jacob Fountain, who was on directed patrol. Hill had five outstanding warrants for burglary and five theft charges. He was booked into the Rutherford County Adult Detention Center and bond was set at $97,500.