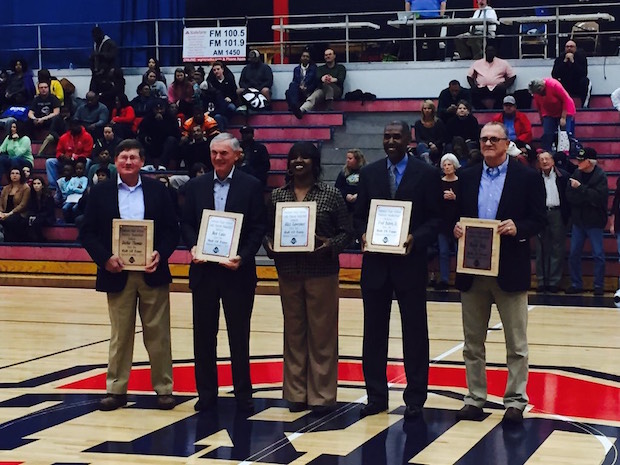 Lawrence is generally regarded as one of the best athletes ever in the city of Murfreesboro. She scored over 1,900 career points, could break a press with her great ball handling skills and once scored 38 points in one game. Alice was a member of Oakland's first District Championship team in '82-'83 and was All Mid-State an amazing three times and All State in '84. She also averaged over 20 points a game for three straight seasons.

Batten was a three year starter who was All District and All Region twice and also All State. He also scored over 1,000 points in his career and went to two state tournaments while winning at least two player of the year awards. Fred was also an excellent student and went on to graduate from MTSU and later from Vanderbilt Divinity School.

Coach Ben Cates was Oakland's first girl's basketball coach when the school opened in 1972. He won 332 games in a long career which included nine years at Kittrell High. In 1980, he made the change from 6-on-6 basketball to 5-on-5 with little trouble and went to the state three times in his career. Cates played at Kittrell on the legendary and very popular Boys From Cripple Creek Blue Devil teams and went to the state tournament as a player.

Coach Dickie Thomas was a terrific athlete in at least four sports and also a fine coach of football, basketball and golf, where his Oakland teams won both a girl's and boy's state championship. His Oakland boy's teams won 218 games and went to four state tournaments over a ten year period. Perhaps his finest moment in athletics came when the unbeaten Central Tigers won the state championship in 1965 over Alcoa. Thomas was the point guard and captain. The trophy is on display at Central Magnet School.

Coach Randy King had the longest and most successful run of any basketball coach in Rutherford County. His Oakland teams were 552-168 in 23 seasons with over 20 wins in 20 straight seasons. Many of those seasons he had over 30-wins. His Oakland teams also made five appearances in the State Tournament. King was Athletic Director at Oakland for over two-decades and the Oakland Gym is named for him. He presently is on the faculty and Athletic Director at Providence Christian School.