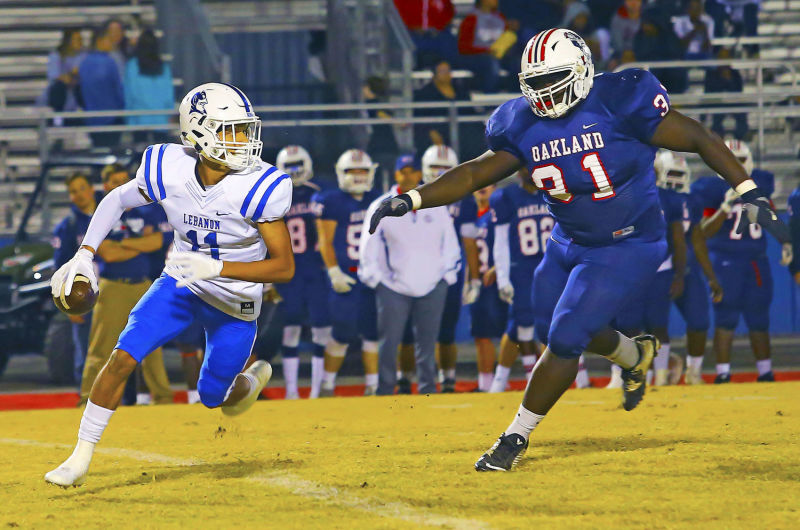 Lebanon's Chandler Crite runs out of the pocket to avoid the sack by Oakland's Blake Spencer. Photo by Ethan Scott of the Murfreesboro Post.

Oakland High School football has been selected as a finalist for the Varsity Brands Spirit of Sportsmanship Award.

The national award that will be announced on May 12 in Orlando, Florida. The award submission was based on the Oakland vs. Lebanon High School football game on Nov. 3, 2107.

Lebanon's touchdown came on the last snap of the game, as Blue Devil senior Ashton Filder scored on a prearranged 50-yard Jet Sweep (video below).

"If an opportunity arose, we had agreed that he is a well-deserving player that was allowed to play this year," Oakland coach Kevin Creasy told the Murfreesboro Post. "They say he is a kid that never misses a workout, never misses a practice and I think that's his first touchdown of his life. So, I think that was the right thing to do."

Coach Gentry was appreciative of the Oakland staff and players on the last play.

"Coach Creasy and I exchanged text messages during the day," Gentry said. "I told him it was in his court to do it or not and I appreciate Oakland being on board. I know Ashton appreciates it. We gave him the game ball."

Ashton Fidler takes one to the end zone and scores for the Blue Devils at Oakland.