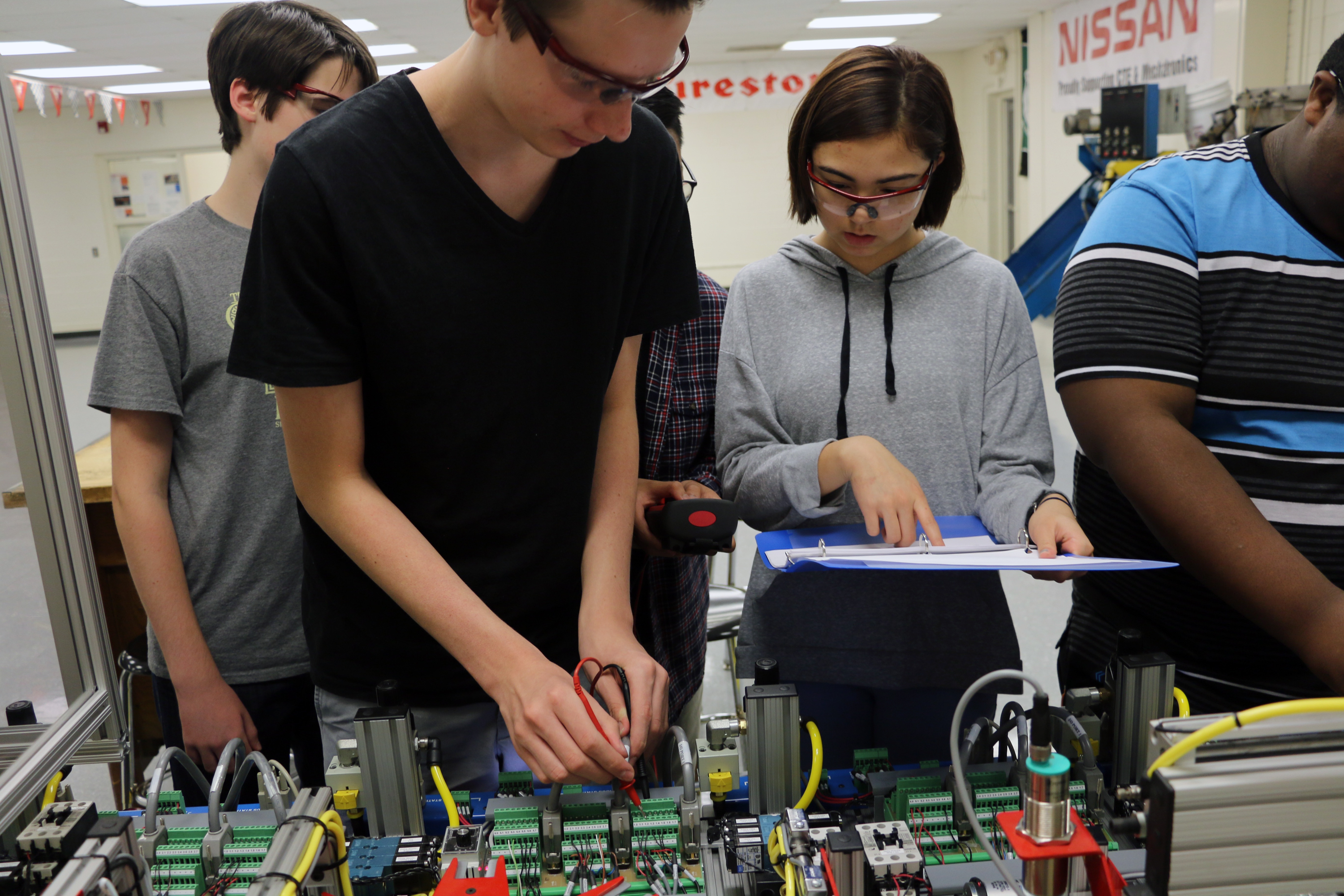 Above, Oakland students Matthew Utzig, left, and Rachel Ivey measure readings from a piece of mechanical equipment in the school's Mechatronics labratory, which was the first high school facility of its kind when it opened in December 2015.

"Good is the enemy of great."

Bestselling author Jim Collins wrote the defining quote in his No. 1 seller "Good to Great." The product of a five-year research project, Collins' book surprisingly sold more than four million copies and has been cited by some of Wall Street's top CEO's as the best management book they've read.

It's no surprise an educational leader like Bill Spurlock has twice-read it -- once in 2001, when it was released, and again in 2011 -- and referenced the quote when explaining that those who think they're good often "become settled."

"In a school," Spurlock said, "I always say you have two different types of people. You have settlers and you have pioneers. You can never have too many pioneers, and you do not want too many settlers. It's those who strive to get better every day that keep you on your toes. They inspire you to look beyond what you have accomplished and continue to seek ways to improve."

Since taking over as principal at Oakland High School in September 2008, Spurlock has done anything but settle.

He's been a pioneer advocating on behalf of students and public education.

And, perhaps, more importantly, he's helped Oakland restore its pride in the red, white and blue colors of the school known on the playing field as the Patriots.

He accomplished this by identifying internal personnel who displayed leadership qualities, empowered them in what he termed a "bottom-up approach" and together they set goals. Those goals are not just preparing students for college -- "not everybody has to go to a four-year university" -- but also trade school or to successfully find employment as a skilled laborer in the local workforce.

This approach has allowed students and administrators to develop "a sense of pride" in what they have accomplished together.

Since it first opened in 1972, Oakland students have accomplished a lot in and out of the classroom.

Earlier this year, Oakland alumnus Chris Young scored his eighth No. 1 hit single with the release of "Think of You," a duet with Cassadee Pope. The song topped the Billboard Country Airplay chart 10 years to the day after he won Nashville Star and signed a recording contract with Sony Music Nashville.

Wes Counts was a standout on the football field in the mid-1990s.

He played college football at Middle Tennessee State University, where he was named the 2001 Sun Belt Conference Player of the Year and went from there to play professionally in the Arena 2 league.

This Friday, Oakland, which is led by standout player JaCoby Stevens, will host Hillsboro High School in a rematch of last year's 36-28 win. This year's game will be broadcast live on ESPNU from Ray Hughes Stadium at 8 p.m. Last year's Patriots team was a 6A semi-finalist, while Hillsboro was a 5A quartefinalist.

In the classroom, highly-regarded Vanderbilt University named Oakland graduate Jackson Vaught the "Most Outstanding Senior" in 2016. Pamela Watson, another recent Oakland graduate from 2012, was one of three undergrad students at Mississippi State University to work with Matthew Brown in isolating and classifying a unicellular microscopic protist.

Vaught and Watson are both graduates of the International Baccalaureate Diploma Program.

According to www.ibo.org, the IB program is for students aged 16 to 19 and is respected by leading universities across the globe. Through the diploma program, schools are able to develop students who have excellent breadth and depth of knowledge; flourish physically, intellectually, emotionally and ethically; study at least two languages; excel in traditional academic subjects and explore the nature of knowledge through the program's unique theory of knowledge course.

"It's exciting to see what they're doing now," said IB coordinator Carissa Clark, who noted students who earned IB diplomas in 2016 were awarded more scholarship money than any previous graduating class. "That's what makes it all worth it, knowing the impact that the IB program is having on students. We've had some amazing results."

Clark added, "It's a huge part of the school. People are starting to understand the benefits ... and IB in general is becoming more popular in the U.S."

There are other accomplishments too.

Collectively, as a school of more than 2,100 students, Oakland was recently honored by Habitat for Humanity as the Volunteer School of the Year.

"That's a type of life lesson that a lot of kids don't get an opportunity to experience," said Spurlock, who explained "what makes Oakland High School unique is that we are a kind of like a school within a school. We have an International Baccalaureate program, where we have approximately close to one-third of our population enrolled in some type of IB class. We are a magnet school located inside a large comprehensive high school. I always use the analogy, that we're like society, because we all have a variety of strengths and weaknesses."

He added, "We are like a well-oiled machine. We have different moving parts that come together to work seamlessly."

Spurlock followed William "Butch" Vaughn, who had come to Oakland after stints as principal at Central and Blackman middle schools.

It was Vaughn who initiated the IB program in the Fall of 2008, but later retired. Spurlock was brought in to see that vision through. IB is not new in the U.S., but it's still relatively new in Tennessee.

Originally founded in 1968, in Switzerland, the IB program didn't begin emerging in the U.S. until 90s. Today fewer than 900 schools nationwide offer the diploma. Oakland is one of only 14 of them in Tennessee.

Clark, who was named IB coordinator in January, said 55 rising juniors are IB diploma candidates, which is up from an average of 25 students in recent years.

Senior Alvin Synarong said he has improved both his work ethic and time management skills, while fellow senior Kaytin Harris said the IB program is challenging her in as she prepares for college.

In just the past few years, students graduating with an IB diploma have gone on to attend the University of Pennsylvania, Duke University -- "IB has given me the skills I need to succeed in college," said Annabel Casteel, who will graduate from Duke in 2020 -- Vanderbilt University, the University of Tennessee, Brigham Young University, Brown University, New York University, University of the South, the Naval and Air Force academies along with MTSU and Rhodes College.

Julia Greene, who attended Rhodes after graduating from Oakland, is currently living and working in Germany for Global Crops Diversity Trust.

In addition to the IB program, three years ago, Oakland started the first mechatronics academy in Rutherford County and launched the first on-site laboratory at a high school in the country. It offers Oakland students dual enrollment at either MTSU or Motlow State Community College.

According to Oakland's website, the program is designed for students interested in becoming a mechatronics technician or mechatronics engineer. Course content focuses on the components of manufacturing systems, collection and analysis of quality data, electronics, mechanics, fluid power systems, computers and control systems, and technical documentation and troubleshooting.

Mechatronics professor Leonard Ciletti, who teaches a cross-curriculum of courses, including math and engineering at Oakland and Motlow, said his students are "getting an early glimpse at what engineering aspects are out there for them to look at."

Mechatronics was first developed at Motlow in 2008 and Oakland adapted the dual enrollment program beginning with the 2013-14 school year. This year starts Oakland's fourth year.

According to Ciletti, eight students recently completed internships with local corporations such as Nissan and Bridgestone, while Schwan Cosmetics hired four recent Oakland graduates with a plan to pay for their post-secondary education and training.

"It wasn't just that I got hands-on experience with engineering. I got hands-on with how the job worked," said senior Luke Hicks, on his experience working as an intern at Schwan. "It was pretty cool to see how everyone played a part."

After graduating from Oakland with a Level I certification, he plans to pursue additional Siemens certifications through Motlow and then plans to complete an advanced degree in the mechatronics field.

"That was one of the big things," said Ciletti, who cited his own passion for combining electrical engineering and applied math, "having these companies come in and talk to my kids and want my kids. ... I want to help create future engineers."

Spurlock also referenced the pride he has for the JROTC program because they completed multiple service-oriented projects.

"They weren't just observers," said Spurlock, of students involved in both Mechatronics and JROTC. "They were participants. That's very important. Anything we do, we want them to get that opportunity to participate because that's (when) learning takes place."

Spurlock added, "Perhaps one day they will come back to our community as business leaders, or social leaders, and make a positive impact on society."

Michael VanHoutte, a parent of a recent IB graduate, agreed with him.

VanHoutte added, "Most IB students that I got to know expressed a genuine desire to make a difference in society and will likely go on to be successful in many ways."

One way in which students have been successful outside of the classroom has been when it comes to representing the school on a field or court.

They're students first and then athletes, but there is no denying that a successful sports programs can build school pride virtually overnight. At Oakland, five sports -- football, baseball, boys and girls golf and track & field -- have claimed nine state titles.

Yes, there have been dozens of all-state honors earned by student-athletes in all sports offered at Oakland, and there are literally too many county and regional accolades -- individual and team -- to namecheck them all from its 45-year history.

"Sports to me," said Spurlock, who was also referring to sports like bowling and rugby, which claimed titles in 2001, 2009, 2014 and 2015, "transcend from the athletic arenas into the classroom. They're not the only thing that provides an impetus for academic excellence, but they certainly can be a part of it. ... In the South, we love sports. Rutherford County is no different."

"My blood runs red, white and blue," said Linda Hodge, who has been Spurlock's secretary since his arrival. Hodge and her husband Terry, a member of the RCS Board of Education, are Oakland graduates. Ms. Hodge was a freshman the year the school opened and among the first class (1976) to graduate after attending the school for four years.

"We say, once a Patriot always a Patriot."