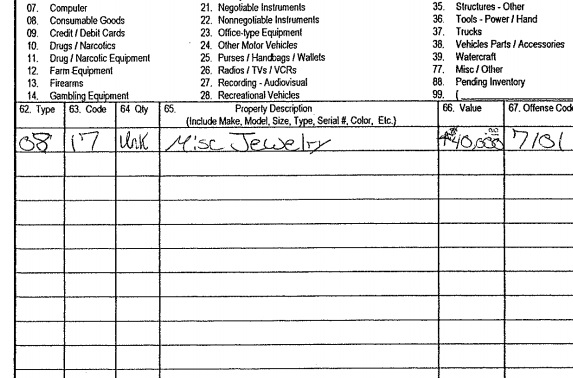 Portion of actual police report above

Some $40,000 worth of jewelry was reported as stolen by a homeowner in Murfreesboro. The problem is, the owner of the jewelry doesn’t know exactly where the jewelry was taken.

According to a Murfreesboro Police Incident Report filed on Wednesday, the family recently made the move from Florida to Murfreesboro. Upon their arrival they discovered that the jewelry was missing. The victim called the moving company after the dust settled and questioned them about the missing jewelry. The manager with the company claimed that he had no information on the missing items.

The problem now revolves around figuring out what town the jewelry was taken in. The report states, “There are no known witnesses, suspects or proof the jewelry was stolen in Murfreesboro.”