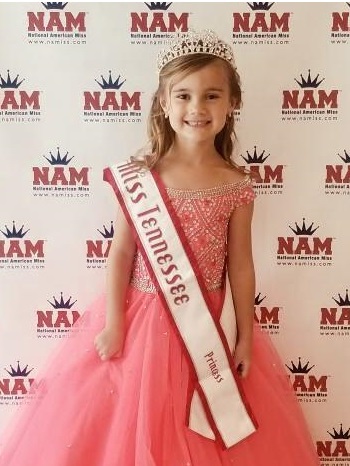 Berlyn Gamlin is a kindergartner at Wilson Elementary School.

Unlike some of her new classmates -- many of whom are attending school for the first time -- Gamlin is already experienced in meeting and making new friends with kids she has never met before.

That has been her favorite part of competing in statewide and now national pageants.

Her trip to Anaheim, California, will take place Nov. 23-30. She will be competing in a weeklong pageant as a representative of Tennessee. During the pageant, she will participate in a formalwear competition -- girls under 13-years-old are not allowed to wear makeup -- where participants are scored on confidence, presence and gracefulness.

Gamlin, who is required to perform more than four hours of community service to even participate in the national pageant, will also present a personal introduction in front of more than 400 people followed by a corporate style interview with six judges.

"This is a big task for a little girl," said her mother, Leanne Gamlin, "but she mastered it during her state competition back in July."

She added, "This little girl with a big heart wants to make a big impact during her year as Queen."

Berlyn will meet the Gov. Bill Lee in Nashville on Sept. 12 and U.S. Sen. Marsha Blackburn early next month as well.

How did it feel to compete in the pageant? Were you nervous or calm?

I was nervous because I wanted to win, but excited to meet some new friends.

What are you looking forward to when you go to Los Angeles?

Seeing my friends and going to Disneyland.

When you meet the governor, what is the question you most want to ask him?

Have you told any of your new classmates or your kindergarten teacher? What was their response?

Yes, I did tell them. They said, 'Wow, congratulations' and gave me a hug.

What are you most looking forward to this year?

I am looking forward to making friends and going to Disneyland.