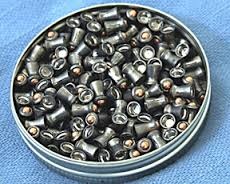 Typical pellets for a pellet gun

"During the game, there was an incident involving a passing car and a pellet gun. Law enforcement with the sheriff's office SRO division responded immediately and the suspects have been taken into custody. No one was injured and all students are safe. The sheriff's office is handling the investigation and will address other questions once the investigation is complete."