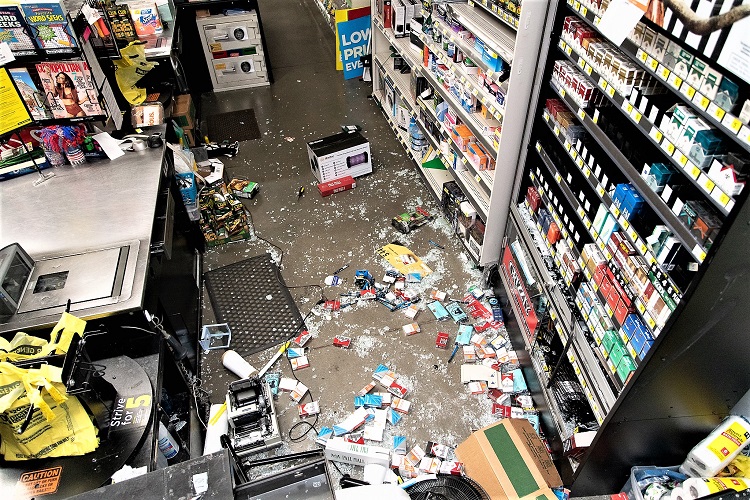 (MURFREESBORO) Help Murfreesboro Police solve the cigarette burglaries. Phone tips to CrimeStoppers at 615-893-STOP (7867) and be eligible for a cash reward of up to $1,000. NO ONE, not even the police, will know your identity.

There have been 13 burglaries over the past couple of months. In one of the break-ins, the thieves stole more than 100 cartons of cigarettes and an additional 110 single packs.

The break-ins have occurred at different times of the night. In most of the burglaries, a rock was used to break the glass on the front door to gain entry. The suspects are in and out of the businesses before officers can arrive.

69 Vape N Smoke 1627 NW Broad Street On 4/19/19 at approximately 12:36 a.m., two suspects, unknown race, threw a jack stand through the front glass door and entered the store. They took merchandise from a display case and fled through the back door.

Sami's Market 2975 S. Rutherford Blvd. Suite B On 5/10/19 at approximately 1:07 a.m., a male, unknown race, entered the business through the front door and begin taking more than 100 cartons of cigarettes and an additional 110 single packs. The suspect left through a rear door.

Dollar General 2011 SE Broad St. On 5/28/19 around 11:38 p.m., an unknown subject broke out the glass of the Dollar General (2011 SE Broad) gained entry and attempted to steal cigarettes but was unable to. The suspect is possibly a black or Hispanic male.

A M Tobacco and Beer 2075 Lascassas Pike Suite A On 5/28/19 at approximately 11:49 p.m., video surveillance shows a black male wearing dark navy-blue pants, sweatshirt, beanie, black sneakers with white soles, gloves and his face covered throwing a rock through the glass front door and made entry into business. The suspect went behind the counter and stuffed around 20 cartons of Newport Menthol cigarettes in a dark-colored satchel style bag before leaving the business.

Kwik Mart 315 N. Front St. On 6/1/19 around 2:09 a.m., surveillance video captured a black male, wearing a black hoodie, black pants, black sneakers with white soles, white gloves with a shirt or bandana covering his face and entered the business by tossing a large rock through the front glass door. The suspect grabbed several boxes of Menthol cigarettes, shoved them into a black duffle bag and ran out of the business. The suspect only spent two (2) minutes inside the store.

South Church Street Market 1411 S. Church St. On 6/5/19 at approximately 10:15 p.m., a rock was used to break the glass of the business. An unknown suspect or suspects entered the business and stole about fifty-five (55) cartons of cigarettes.

Thompson Tobacco and Beer 2122 N. Thompson Lane Suite E On 6/5/19 around 2:20 a.m., responding officers discovered a rock had been thrown through the front glass door of the business. Surveillance video showed a suspect wearing a dark hooded sweat shirt and light-colored shorts attempting to make entry into the business around 12:06 a.m. The suspect took off running after he couldn't get inside. No merchandise was taken.

Dollar General 4412 Manchester Pike On 6/17/19 at approximately 2:32 a.m., patrol officers responded to the business in reference to an alarm. Officers discovered the back door unsecure and several packs of cigarettes missing from a cabinet as well as packs strolled everywhere on the floor. The suspect was seen on video appeared to be a white male approximately 6-foot tall, slim build and was wearing a black hoodie, black pants and purple under shorts. The suspect was in the store only two minutes.

Dollar General 2015 Mercury Blvd. On 6/21/2019 around 12:15 a.m., a suspect used a large rock to break the glass of the front door to enter the business. The suspect, wearing blue jeans shorts, black and white patterned long sleeve shirt and a blue T-shirt wrapped around his head, went directly behind the counter to the cigarettes display. He took cigarettes and a box that contained Subwoofer speakers. The suspect returned to the business around 3:15 a.m. and took a box containing a printer. Store management believes this is the same suspect from the June 9 burglary.

Dollar General 1707 Bradyville Pike On 6/23/19 at approximately 3:53 a.m., surveillance footage shows a black male, matching the description of recent burglaries where cigarettes were stolen gain access to the store by throwing a large rock through the glass door. The suspect used the same rock to break the cigarette display case and stole multiple packs of Newport cigarettes.