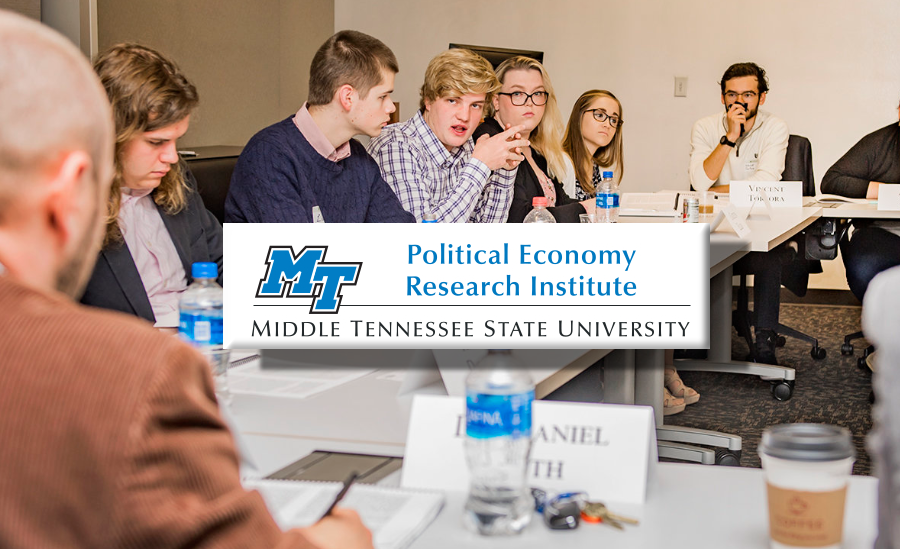 Murfreesboro, TN: The Political Economy Research Institute is pleased to release its lineup of public lectures for the 2019-2020 academic year.

The year will be kicked off on October 2nd at 12:40pm with a public lecture on "The Continuing Relevance of F. A. Hayek" from Dr. Peter J. Boettke (Mercatus Center at George Mason University) on his new book, F. A. Hayek. Dr. Boettke has authored 14 books, including Living Economics and The Battle of Ideas.

Next, the Political Economy Research Institute at MTSU will host Dr. Jay Cost (American Enterprise Institute) on October 3rd at 7:00pm for a public lecture on the American constitution. Dr. Cost, a columnist at National Review Online, is the author of three books, including A Republic No More: Big Government and the Rise of American Political Corruption.

That event will be followed up by a public lecture from MTSU alumni Dr. Howard Henderson (Director of the Center for Justice Research at Texas Southern University) on October 31st at 2:20pm. Dr. Henderson will deliver a lecture on his research on criminal justice reform. This lecture is generously supported by the MTSU Distinguished Lecture Fund.

The final event of the fall, will be on November 7th at 6:00pm. Dr. Benjamin Powell (Free Market Institute at Texas Tech University) will deliver a public lecture on "The Myths and Realities of Socialism," about his new book, Socialism Sucks. Dr. Powell's research findings have been reported in more than 100 popular press outlets, including The Wall Street Journal and The New York Times. He also writes frequently for the popular press, including a regular op-ed column for The Huffington Post. He has appeared on numerous radio and television outlets, including CNN, MSNBC, Showtime, CNBC, and he was a regular guest commentator on FOX Business Network's Freedom Watch.

To learn more about the PERI or these upcoming events please visit our homepage www.mtsu.edu/peri

About The Political Economy Research Institute:

Established in late 2016, the Political Economy Research Institute is a joint venture between the Jennings A. Jones College of Business and the University Honors College, established with initial seed money from the Charles Koch Foundation. The mission of the institute is to engage undergraduate and graduate students with faculty in research that will further the understanding of business and economic principles, as well as their impact on regional, national, and international financial conditions and the well-being of society. To advance its mission, the PERI will engage in research and educational programs which uncover the institutions and policies that encourage and enhance human well-being.