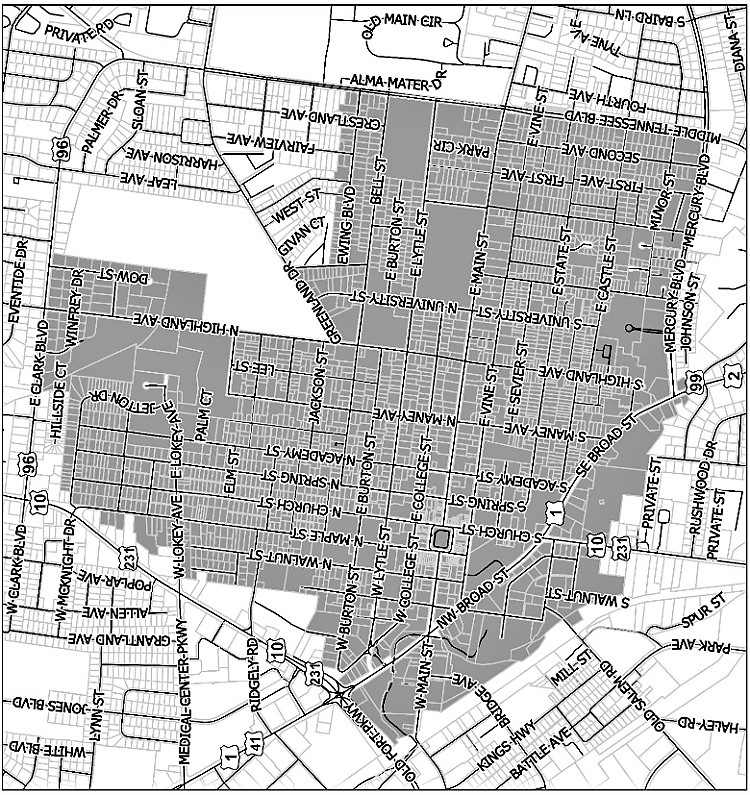 (MURFREESBORO) If you have driven around Murfreesboro's historic residential district, you have seen new homes being constructed, town homes, businesses and other structures that would not have been permitted under earlier code regulations. A public hearing has been set for 7:00 o'clock Thursday evening, December 19, 2019, in the Council Chambers of the Murfreesboro City Hall, 111 W. Vine Street.

A City Core Overlay (CCO) is what has enabled many home owners to make changes in the structure on their downtown residential property in recent years. They were able to develop it or sell the property to an investor who is interested in creating multi-level townhomes, multiple residences on smaller yards, and other creative architecture that may not have been allowed in earlier years.

Mayor Shane McFarland said, ""Building off of the vision of the North Highland Avenue and Historic Bottoms planning studies, which were adopted by the Planning Commission in 2017 after extensive public input, the modification of the City Core Overlay (CCO) regulations seeks to improve upon the more suburban zoning regulations that are currently in place in the City's core and enable development and redevelopment that is more consistent with the urban form of this area. The regulations will apply to both commercial and residential developments located in the CCO district. The proposed expansion of the CCO boundaries includes areas in the existing CCO district as well as areas identified in the two planning studies referenced above."

Over the past week, the City of Murfreesboro has sent a written notice to land owners of the 2,348 parcels being considered to be a part of an expanded business district core overlay.

The notice that was just sent out, explains that the proposed CCO would support new developments downtown that are compatible with existing developments. The rules of the Core Overlay state that if construction is done on a vacant lot, the structure must have a height and front setback similar to other buildings on the block.

Under the proposed historic business district changes, the CCO would also allow for reduced parking and landscaping.

The proposal goes farther, and notes that if a structure is destroyed or damaged, the property owner would have a one-time exemption to rebuild the former structure without having to comply with new CCO standards. However, after the first rebuild--any future rebuilds would be subject to the same grandfathering standards any any other rebuilds in Murfreesboro.

If you've noticed dramatically differently styles of structures being built, the CCO design standards for specific neighborhoods are no longer a part of the CCO ordinance.

The notice of an application being considered by the city for changes in the zoning within the approximate 920 acres of the historic business district carries with it many changes. To read the entire proposed City Core Overlay that is being considered for the 2,348 downtown parcels, visit www.murfreesborotn.gov/210/Planning-Zoning.

If you have questions, phone the Murfreesboro Planning Department at 615-893-6441.