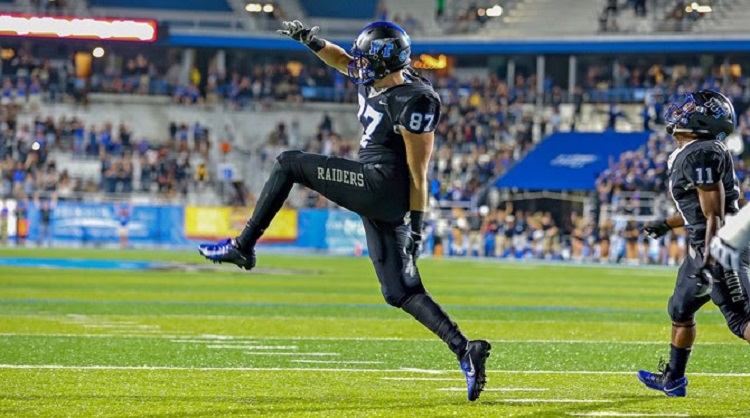 Fresh off its bye week, Middle Tennessee started its Conference USA slate with a tough home matchup on Saturday and came up with an unbelievable comeback win 25-24 over Florida Atlantic.

Chip Walters with the call on NewsRadio WGNS and the Blue Raider Network.

"This was a fantastic win," MT Head Coach Rick Stockstill said. "You beat a team like that, coming in the underdog ... and we played so hard and strained and competed and played our tails off and never gave up.

"This team showed a lot of mental and physical toughness tonight, and I'm really, really proud of them."

The defending C-USA champion Owls (2-3, 0-1) got up early but couldn't hold the Blue Raiders (2-2, 1-0) down in their annual Blackout Game and Hall of Fame Weekend.

FAU held a 21-3 lead in the first half and 24-10 third-quarter advantage, but the first career rushing score from sophomore Brad Anderson with a minute left in the third cut the deficit in half.

Then, after the 24-17 score lasted most of the fourth quarter, Middle Tennessee capped a nine-play, 43-yard drive with a Tavares Thomas 1-yard rushing touchdown on fourth down with 38 seconds remaining, bringing the blue and white to within 24-23.

Instead of going for the PAT and sending the game to overtime, Stockstill sent his offense back on the field for the two-point conversion and the win.

Redshirt senior quarterback Brent Stockstill took the snap and ran to his left, and after pumping a few times, he threw with a man in his face over the middle of the end zone. Graduate Gatlin Casey, who made his first start for the Raiders, was there, jumping and snagging the ball with his fingertips to give Middle Tennessee a 25-24 lead, its only lead of the game.

Senior safety Jovante Moffatt, who made his first start of the season after being out with an injury, intercepted an FAU pass on fourth down on the ensuing drive to ice it.

Moffatt led a defense that played like its hair was on fire in the second half.

After allowing 301 total yards (184 rushing) in the first half, the Blue Raiders gave up just 125 total in the second half and only three points.

"It was fun to be back with the guys," Moffatt said. "Our communication was a lot better [in the second half]. We knew what the game plan was going in, and we executed it."

The game plan going in was to contain defending C-USA Offensive MVP Devin "Motor" Singletary, who led the nation in rushing yards and touchdowns last season and has the most rushing TDs (12) in the country so far this year.

Singletary rushed for 79 yards and two touchdowns on 22 carries in the first half, but after halftime managed only 39 yards on 12 attempts.

"At halftime, we made the adjustments," MT defensive coordinator Scott Shafer said. "Hats off to the players, they did a nice job seeing where the voids were and how we could fix them with some checks and adjustments. I'm just really proud of the way the kids played in the second half. It was a true team victory."

Moffatt finished with eight tackles and the interception, while his safety mate, sophomore Reed Blankenship, had a career-high 10 tackles and 1.5 tackles for loss after missing the Georgia game in Week 3 with an injury. Redshirt senior linebacker Darius Harris also had 10 tackles.

Offensively, Brent Stockstill finished 27 of 40 with 259 passing yards, a TD and an interception, and he led the team with 56 rushing yards. His favorite target through the air was Ty Lee with six catches for 62 yards, and senior Patrick Smith added a career-high 89 receiving yards on five catches. Thomas also had a rushing and receiving touchdown in his first game action since the season opener against Vanderbilt, and Anderson had 53 receiving and 51 rushing yards.

Despite the emotional win, it means nothing if the Blue Raiders don't continue the momentum. That's what Rick Stockstill and his son told the team after the game.

"That's the best win I've been a part of," Brent Stockstill said. "The first conference game of the year against a really good team and the defending conference champ ... it just makes it so sweet that we were somehow able to score one more point than the other team.

"But, we have to get back to work tomorrow. We have a really good team in Marshall, and we're going to their place. We have to get ready."