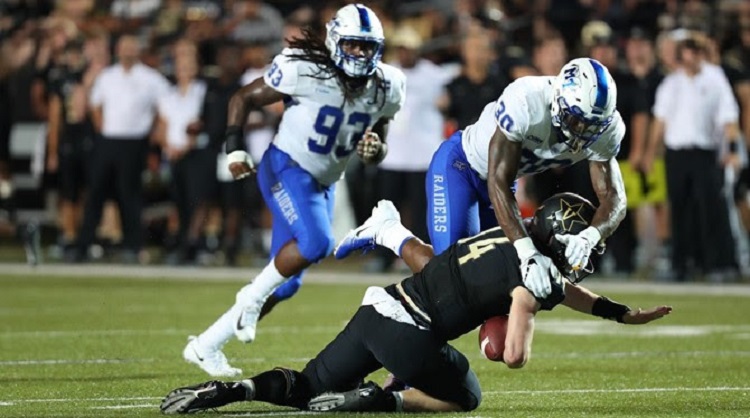 Middle Tennessee dropped a 35-7 decision at Vanderbilt to open the 2018 campaign Saturday in Nashville.

The game was tied 7-7 after the first quarter and Vanderbilt carried a 14-7 cushion into the half, but the Blue Raiders were unable to find the end zone in the final two quarters as the Commodores used a 21-0 second half to pull away.

"Although I know we can make improvements and get better in areas, I feel better today than I did after this game a year ago," Middle Tennessee Head Football Coach Rick Stockstill said. "Their size gave us some problems. They did a good job, and you have to tip you cap to them."

Quarterback Brent Stockstill was 24-of-36 for 178 yards and a touchdown pass to CJ Windham. Tavares Thomas led the ground game with 32 yards on eight carries. Maurice Gordon (four carries for 27 yards) and Chaton Mobley (6-24) also were in on the action.

Brad Anderson and Ty Lee led the air attack with five catches each.

Darius Harris led the Blue Raider defense with eight total tackles, one sack and one tackle for loss.

Vanderbilt opened the scoring with a 30-yard scoring run on the first possession of the game, but the Blue Raiders fought back and tied the game when Windham hauled in a 4-yard pass from Stockstill.

Unfortunately, for the Blue Raiders, it would be their only venture into the end zone.

The Blue Raiders will open the home slate against UT-Martin Saturday. Kickoff is 6 PM.

MIDDLE MAN: Senior Darius Harris supplied a strong all-around game in his first outing as the starting middle linebacker. Harris led the Blue Raiders with eight tackles, six solo, one sack and one tackle for loss.

BONADIES HAS SOLID NIGHT: Senior punter Matt Bonadies enjoyed a solid night for the Blue Raiders. Bonadies punted four times for a 42.8 yard average and two of his kicks were downed inside the 20-yard line. The Buford, GA, native had a long punt of 50 yards.