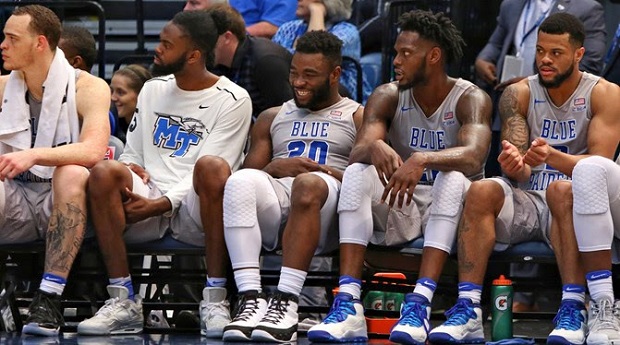 Revenge was sweet for Middle Tennessee Friday, as the Blue Raiders advanced to the Conference USA Tournament finals for the third-straight year with an 82-56 drumming of UTEP."Our team was really good today," MT head coach Kermit Davis said. "We were really focused - we've been a really focused group all year long - and we were really determined."The defending C-USA Tournament champion Blue Raiders (29-4) avenged their lone conference loss this season, a close 57-54 defeat at the hands of the Miners (15-17) on Feb. 4. The 29th win set a new school record for victories in a regular season and was their ninth in a row."That's an unbelievable thing," Davis said. "To win 29 games and the number of games those guys have won over the last six years really is pretty remarkable. I'm proud of the players and so happy for the fans."We think in our minds we have a lot of basketball ahead of us, but that is a remarkable milestone."The outcome was never really in question, thanks to a stifling brand of defense from the C-USA regular-season champs. After UTEP hit the first shot of the game, they never led again and didn't cut MT's advantage under 15 points in the entire second half.Through the first nine minutes, the Miners had as many turnovers (seven) as they had points while making just three of their first eight shots. That defensive effort never wavered for the Raiders, as they allowed UTEP to shoot just 39 percent (20 for 51) in the game and forced 18 turnovers, leading to 25 points. Twelve of those turnovers came via MT steals, led by five from Giddy Potts."In the first half, the bench came in and set the tone on the defensive end," Potts said. "We fed off their defense and came out in the second half with the same amount of energy."With the Miners' offense locked down, the Blue Raiders went to work on their own offensive end behind senior Reggie Upshaw.The all-conference second-teamer and C-USA All-Defensive Team member poured in a team-high 18 points, shooting 6 for 11 and 3 for 5 from 3-point range. He also grabbed a game-high eight rebounds.It was a much better showing for Upshaw than he had in the loss earlier in the year to UTEP, when he went scoreless for the only time this season and had just one rebound in 23 minutes played."I just knew that my team needs me," Upshaw said. "I'm the senior leader, so I wanted to just go out and show I'm not worried about the last game I played against them and that I was going to give it my all, especially since it's conference tournament time."Upshaw was far from the only effective Blue Raider on the offensive end. Ten players scored at least one basket, with Potts (14), Williams (13) and Antwain Johnson (11) each getting into double figures. Freshman Tyrik Dixon scored just three points but added seven rebounds, five assists and three steals."We've had confidence in [the bench] all year, we've just been waiting on everyone to start kicking at the right time and all at the same time," Williams said. "That's what's making us so good right now, because everyone is making shots and defending. That just makes us a dangerous team."Middle Tennessee will try for its second-straight C-USA Tournament crown on Saturday at 7:30 p.m. at Birmingham's Legacy Arena. If it wins it will become the fourth Conference USA school to register 30 wins in a season, joining Memphis (five times), Cincinnati (once) and Louisville (once).The Blue Raiders will take on sixth-seeded Marshall, who upset second seeded La Tech. MT is 2-0 this season against the Herd.