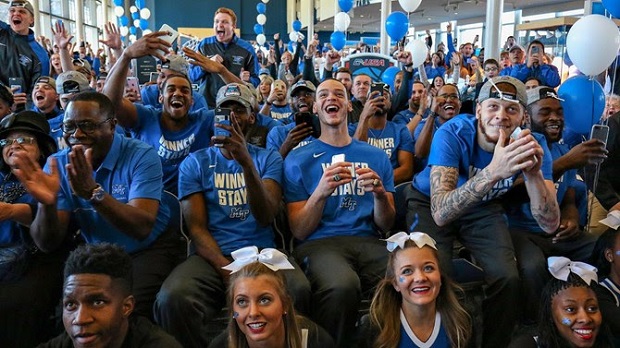 The announcement was made Sunday following the Raiders' second-straight Conference USA Tournament championship on Saturday. The Blue Raiders earned a No. 12 seed and will face No. 5 seeded Minnesota in Milwaukee, Wisconsin on Thursday.

Reggie Upshaw says the entire team is excited to be in the NCAA field for the second year in a row...

We will have the game for you here on NewsRadio WGNS on Thursday with Chip Walters from Milwaukee!

"We know Minnesota is going to travel really well, it's kind of Big Ten country in that area," MT head coach Kermit Davis said. "It would make our players feel really good to have a great contingent of Blue there on Thursday."

MT has now made the field of 68 three times in the last five seasons, and its No. 12 seed is the second highest in school history.

Middle Tennessee is making its ninth NCAA Tournament appearance and is 3-8 all-time in the tournament, with its last win coming against No. 2 seeded Michigan State in 2016. The other Blue Raider wins came against No. 4 seeded Florida State in 1989 and No. 6 seeded Kentucky in 1982.

"We're excited," senior forward Reggie Upshaw said. "Every year you see a 12-5 upset, and to have that 12 seed, we know the history behind it. There's nothing but excitement from us, because we know what we can do when we get into the national spotlight in the NCAA Tournament."

Head coach Kermit Davis will be making his fifth trip to the dance and third as the head man of the Blue Raiders. Davis took the Idaho Vandals to the tournament in back-to-back seasons in 1989 and 1990 after winning the Big Sky Conference regular season and tournament championships both years.

Middle Tennessee currently stands at 30-4 and finished the conference slate with a 17-1 record, good for the No. 1 seed in the Conference USA Tournament in Birmingham. It is just the fourth C-USA school all-time to reach 30 wins in a season, joining Memphis (five times), Louisville (once) and Cincinnati (once), and the 17 league wins are the most in a Conference USA season. The Blue Raiders were the outright regular season conference champs and tournament champs for the first time since 1975, when they were in the Ohio Valley Conference.

The Raiders are led by the dynamic trio of seniors JaCorey Williams and Reggie Upshaw and junior Giddy Potts.

Williams, the Conference USA Player and Newcomer of the Year and All-Conference USA first team member, leads the team in scoring (17.3 per game) and rebounding (7.3). Upshaw, a C-USA All-Defensive Team and all-conference second team member, averages 14.5 points, 6.8 rebounds and 2.4 assists a game. Potts, the C-USA Tournament MVP and all-conference third-teamer, scores 15.8 per game to go with 5.5 rebounds and leads the team with 74 made 3-pointers and 46 steals.

"We're going to take off today, obviously, then get right back to work," Davis said. "I'm sure we'll probably leave on Tuesday, practice in the arena there on Wednesday and kind of get back to our normal schedule."

Middle Tennessee has squared off with Minnesota five times. The Golden Gophers lead the all-time series 4-1, and the last meeting was on March 21, 2012, in the National Invitation Tournament, a 78-72 Minnesota win.

Head coach Richard Pitino's Golden Gophers go into the tournament winners of nine of their last 11 games. They lost in the semifinals of the Big Ten Tournament to Michigan 84-77.

"They had one of the most remarkable turnarounds in college basketball this year," Davis said. "I have a lot of respect for the Big Ten, so we know we'll have our hands full. We look forward to going to Milwaukee.

"We have great respect for Minnesota, and we're sure excited to play."

Pitino is no stranger to facing off against the Blue Raiders. He was the head coach at FIU from 2011-2013, and MT held a 4-1 record over the Panthers over that stretch.