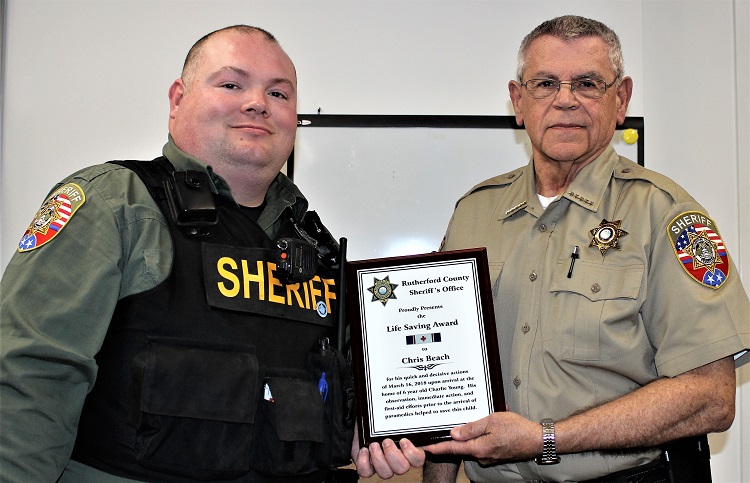 Sheriff Fitzhugh said, "Chris, you changed someone's life forever. Thank you for what you did."

Deputy Beach recognized the seriousness of the situation and remained calm while taking quick action and contributed to saving the girls' life.

Deputy Chief Egon Grissom said, "Beach was recognized and awarded the Life Savers award for his swift and heroic actions."

Sgt. Derek Oeser explained that the deputy responded to a call of a girl not breathing and turning blue. Her parents were frantic. When he arrived, the child showed no signs of life and her skin had already turned blue.

Beach started CPR, but recognized her blocked airway. He gave the girl rescue breaths that slightly opened up her airway and she showed signs of life.

"It is without a doubt, had it not been for the heroic actions of Deputy Chris Beach, the outcome of this night would have been tragic," Oeser said.

The sheriff told Melton he appreciated his years of service.

Grissom thanked Josey for supporting his co-workers during his 30 years of service.

Sheriff Fitzhugh thanked Josey for endeavoring in his years of service where he experienced many changes.