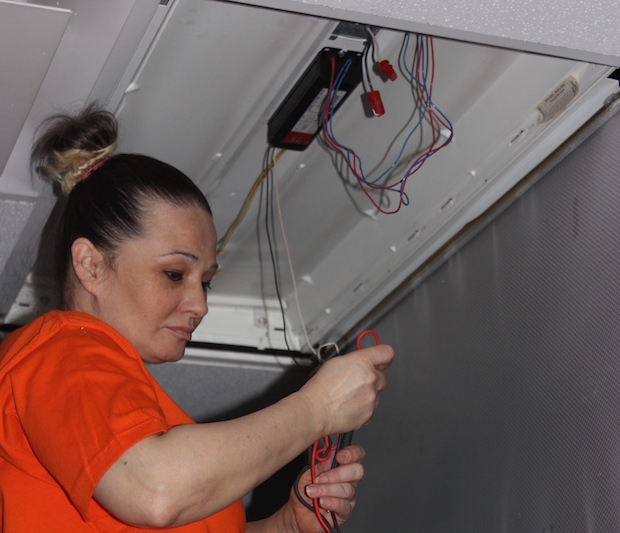 When Tracey Lowe forgot to turn off the water while doing a repair, an unexpected burst of hot water showered her.

"It was a lesson learned," Lowe said with a laugh. "I'll never do that again."

Lowe, an inmate at Rutherford County Adult Detention Center, and a fellow inmate who wanted to be identified as BD, became the first women maintenance trusties in October. They are supervised by Deputy Jennifer Sellers, the first female maintenance employee at the Sheriff's Office.

Referring to Lowe's lesson, Deputy Sellers said she uses extra precautions with the inmates but realizes they learn through practical experiences.

"If they make a mistake, I will coach them," Deputy Sellers said.

Sheriff Robert Arnold said their training by Deputy Sellers allows them to use their skills when they are released.

"But more importantly, they are learning a life-long trade that may lead to new jobs for them when they are released," Sheriff Arnold said.

BD and Lowe said Deputy Sellers teaches them another skill every day.

Because men and women inmates cannot be together, the women trusties fix problems in the women's pods.

Lowe and BD work as a team fixing water leaks and toilets, installing energy-efficient LED lights and doing electrical repairs. When one gets frustrated with a challenge, the other one offers encouragement.

"If a toilet needs to be snaked, we go out and snake it," Lowe said. "We haven't come across anything yet we haven't been able to fix."

Detention deputies often call on them to fix emergency problems when the maintenance staff is off-duty.

If there is a flood from a water leak in the middle of the night, BD said they can turn off the water supply and prevent further damage.

"We can save the taxpayers' money because they don't have to call maintenance in the middle of the night," BD said.

The trusties envision using their new skills the day they will be released from jail.

Because of Deputy Sellers' instruction and mentorship, the women may pursue careers in maintenance at apartment buildings where they can use the skills they learned in jail.

Lowe said she won't have to call a plumber or an electrician to do work at home.

BD said she can change a lock, install a ceiling fan and change out light fixtures at home.

"I have the self-confidence to tackle a job," BD said. "As a homeowner, I can save money. This has given me confidence to accept new challenges and to step out of my comfort zone."