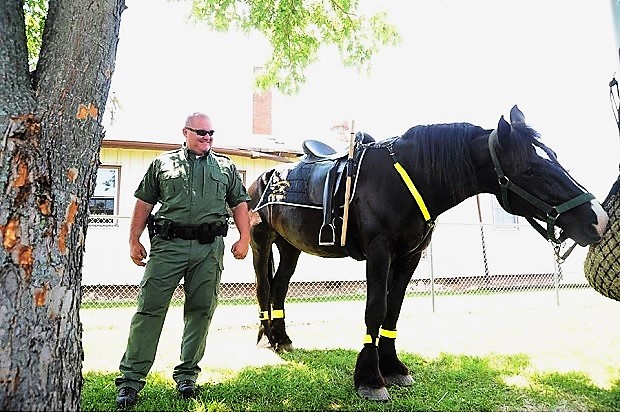 The Rutherford County Sheriffs Office is expanding the use of its mounted patrol for crowd control at football games, shopping centers and even communities.

Sergeant Jon Levi heads the Sheriffs' Mounted Patrol, and he told NewsRadio WGNS, "They're the best form of intimidation without contact."

When asked if a mounted patrol unit would have helped during the recent tragedy in Virginia, he said . . .

Levi noted that the Sheriff's Mounted Patrol will be at MTSU's home football games as well as many high school grid-iron clashes for crowd control. They have already been used several times this year during major music events on the Murfreesboro square and for security in parking lots at area malls.

He commented, "Last Christmas, a female shopper from a neighboring county told me that she now does her shopping in Murfreesboro instead of Nashville, because the horse patrol makes her feel safer."

When Sergeant Levi was on a recent WGNS talk show, listeners encouraged him to propose that Rutherford County purchase the needed riot gear for horses.

Sergeant Levi also noted that all six of the mounted patrol horses are now draft breed equines, which puts them in the massive 2,000 pound behemoth category. He noted that they are well trained and do not get distracted with fireworks, loud crowds or even a landing helicopter.

NewsRadio WGNS will keep you informed on whether or not Rutherford County purchases the special riot gear for the Mounted Patrol.