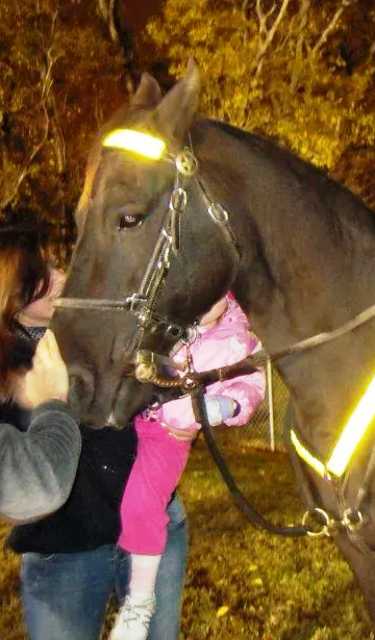 Rebel, one of the original horses in the Sheriff's Office's Mounted Patrol unit, died Saturday. The horse was donated to the Sheriff's Office in 1998-99 and retired about three years ago. He lived his last days under the care of Sgt. Jon Levi. Rebel was about 18 years old.

CC, who is still alive, and Rebel were the "founding fathers" of the Mounted Patrol unit, Sgt. Levi said.

"Rebel and CC were Mutt and Jeff, Abbott and Costello," Sgt. Levi remembered. "They did everything."

One of Rebel's duties included patrolling in shopping centers from Thanksgiving to Christmas each year where he would allow kids and parents to pet him.

Rebel was one of the horses that helped break out a fight during a highly-contested high school football game and restore order quickly.

He searched for missing people, including hot day in White County, when he fell asleep while resting under a shade tree with SRO Kerry Nelson on his back. Rebel shook his head and returned to duty. Another time, he just got down on his knees with Cpl. Troy Hooker.

"He earned the right to ride on Bourbon Street with them," Sgt. Levi said with pride in his voice.

Because of his gentleness, Rebel was the horse new riders rode for training.

"He took care of his riders," Sgt. Levi remembered. "He was as gentle as a bunny rabbit."

Rebel also showed tendencies of being stubborn and grumpy.

"You had to outsmart him, to make him think it was his decision," Sgt. Levi explained.

Rebel's death weighed heavy on Sgt. Levi, especially because the veteran horse took care of the riders in the Mounted Patrol unit. After Rebel died, W.R. Thompson donated the use of his backhoe to bury the horse, a donation that meant so much to Sgt. Levi.

"He was just more than my horse," Sgt. Levi said. "Sixteen years is a long time."