The 2nd Annual Heart of Tennessee Chapter of the American Red Cross “Heroes Luncheon” was held on Wednesday. Red Cross Chairperson Lisa Trail said this year's goal was $75-thousand, and the total exceeded $80,000. 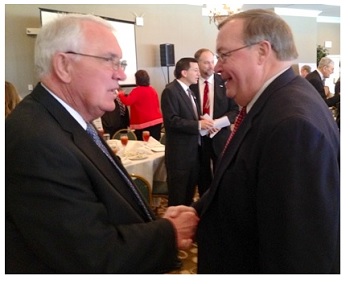 Longtime friend Bob Parks told about his friend.  “Andy has been an advocate and a volunteer leader for the Red Cross for many years and we are very proud to take this opportunity to thank him.”

Womack commented on how the Red Cross first impacted his life ...

He also reminisced on giving blood when Virginia Woodfin was active in the local chapter. "I would give the gift of life just to get to talk with her and learn something new."

She holds the chapter record for volunteering over the longest period of time: more than a half century.

Womack commented that the local Red Cross lost a strong supporter and leader when Joe Black Hayes passed away at age 98 this past December 11, 2013.

A Vietnam Army veteran and an MTSU graduate, Andy has been a resident of Murfreesboro since 1957.  Andy has been a State Farm agent in the local community since 1981 and has also served on the board of the United Way of Rutherford & Cannon Counties and as a past Chairman of the Board for the Rutherford County Chamber of Commerce.  Womack is also a retired Tennessee State Senator after serving from 1988-2000.

“We truly appreciate everyone who attended this event, made a donation and recognized our local Red Cross Hero of the Year, Andy Womack,” said Mike Cowles, Chapter Executive.  “Everyone also really enjoyed hearing from News Channel 5 meteorologist, Lelan Statom, as he talked about the importance of being prepared before disaster strikes and shared with the audience how the Red Cross assisted him after a fire when he first moved to Middle Tennessee.”

For anyone who was unable to attend the event, but would still like to make a contribution to the Red Cross, please call 1-800-RED CROSS or log on www.redcross.org to make a donation.  Checks may also be mailed to the Heart of Tennessee Chapter at 501 Memorial Blvd. Murfreesboro, TN 37129.

Some of the highlights of services provided by the local chapter of the Red Cross in 2013 include:

Approximately 6,000 people who donated whole blood or platelets at the Murfreesboro fixed site.