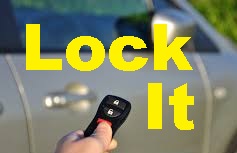 Tis the season to keep gifts and belonging out of sight and to get in the habit of locking your cars, trucks and vans. NewsRadio WGNS spotlights a few of those crimes over the past days here in the 'Boro as a way to encourage everyone to lock-it!

Around 1:15 Wednesday afternoon (12/6/2017), a 21-year old Passage Drive resident looked outside and saw a stranger rummaging through his 2007 Honda Pilot SUV. The suspect fled on foot, but not without taking a Springfield 9-millimeter XDS handgun and $600 in cash. During the foot pursuit, the suspect reportedly dropped an iPod. That device had been stolen from another location. It was returned to the owner. Police encourage everyone to lock their vehicles and keep valuables out of sight. By the way, the handgun has now been entered in the NCIC system.

There was an interesting twist to another auto break-in just down the street. An I-Phone 7-Plus was taken. The owner told police that he had an app that would locate the smartphone. The electronic tracking device took police to a nearby address where police drug activity is suspected. Unfortunately, the phone was not located.

A Pine Court resident told Murfreesboro Police Officer Klint Hill that several unauthorized uses of his debit card had occurred. The victim told police that he allowed his roommate to use the card and pin number. However, she was accompanied by a female friend and that is the person the victim suspects. Unauthorized withdrawals totaling $266 have been reported. He gave police the suspect's name, but no proof has surfaced at this time. Police warn, don't let others used your credit or especially debit cards.

With so many iPad's having tracking devices, thieves seem to be ditching these them almost as quickly as they snatch them. That's what happened yesterday. Police came across iPad Air that was taken from an unlocked Chrysler mini-van. That was another unlock vehicle case. Police came across the missing iPad trashed behind an apartment and returned it to the owner.

Don't leave your car unlocked. Around 10:30 Thursday night (12/7/2017) police were called to Orwell Street where a man discovered that all compartments in his 2004 Pontiac Grand Prix had been opened. After a close check, nothing was reported missing. The man breathed a sigh of relief and vowed to start locking his car.