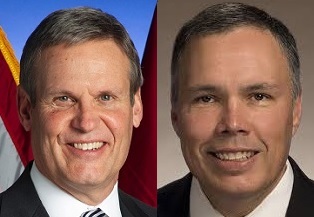 Gov. Bill Lee announced in his State of the State address that he would propose funding for 80 additional positions at Driver Service Centers to help decrease wait times for customers.

State Representative Terry, MD (R-Murfreesboro) has been a leader in the General Assembly in looking for solutions to the problems at the DMV.

"I think this is a step in the right direction in helping to improve the long wait times customers are seeing," said State Rep. Bryan Terry, MD, R-Murfreesboro. "I've taken an active role in pushing for solutions and changes in the system in order to help our citizens. It's encouraging that Governor Lee and his administration recognize the problem and are proposing action."

Driver Service Centers across Tennessee, including in Rutherford County, have been overwhelmed with customers attempting obtain their REAL ID or schedule road tests. Many of the state's 44 service centers are experiencing issues providing timely and efficient services to citizens because of staffing shortages and higher demand the new identification.

Terry has been an outspoken advocate for improving the customer service experience at Tennessee's Driver Service Centers. Terry said he has received many complaints from constituents who reported having to wait up to four hours for service and up to 28 days for a road-test appointment.

"We're still looking at other ways we can improve efficiency, but increasing manpower at the centers will hopefully go a long way in easing the headache of going to the DMV," stated Terry.

All Tennesseans will be required to have a REAL ID by Oct. 1, 2020 for access to all federal buildings, entrance to nuclear facilities, and travel onboard domestic U.S. flights.

Citizens aren't required to obtain a REAL ID compliant license. Those who desire to obtain the credential need the following: proof to establish citizenship or legal presence, proof of Social Security and two proofs of Tennessee residency.

Bryan Terry, MD represents Tennessee House District 48, which is the eastern portion of Rutherford County and a portion of Murfreesboro. Terry lives in Murfreesboro and can be reached by email at: Rep.Bryan.Terry@capitol.tn.gov or by calling 615-741-2180.