Richie James taken in 7th round by the San Francisco 49ers 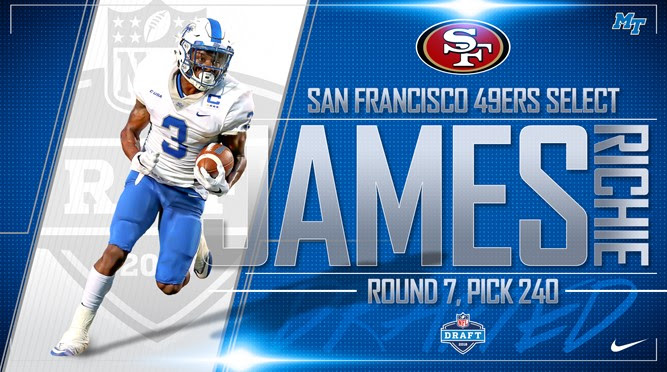 Middle Tennessee wide receiver Richie James has been selected in the 7th round of the 2018 NFL Draft by the San Francisco 49ers. James is the 240th overall pick and the first Middle Tennessee receiver to get drafted since Tyrone Calico went in the second round in 2003 (Titans).

"I am very proud of Richie for achieving a life-long dream and for the way he has represented Middle Tennessee football," said Head Coach Rick Stockstill. "He's a very skilled football player who loves to compete and I expect he will enjoy a long NFL career. Richie will also represent the organization and city in a first-class manner."

James is the sixth player under Stockstill to be taken in the NFL Draft and the first since Kevin Byard went to the Tennessee Titans in 2016.

James, a three-year starter out of Sarasota, Fla., is Middle Tennessee's all-time leader in receptions (244), receiving yards (3,261) and touchdown receptions (23). James also caught at least one pass in all 31 games he played.