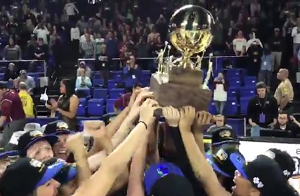 Bryan Barrett and Jon Dinkins had the call of the game on NewsRadio WGNS.
(DOWNLOAD GAME PODCAST HERE)

The game was close to the end, with Riverdale leading 57-55 with about four-minutes to go. However, they went on six-nothing run, led by senior Anastasia Hayes. She finished the game with 33 points and was named the tournament MVP.

Junior Brinae Alexander was one away from a double-double. She had nine points and 18 rebounds in the game. Twelve of those were in the first half.

Riverdale ends the season at 34-and-0, have won 43 in a row and are ranked number one nationally in two publications. It's the Lady Warrior's sixth state title and the sixth in a row for Murfreesboro teams (Riverdale in 2012, 2013, 2016, 2017, Blackman 2014, 2015). Coach Randy Coffman becomes the first Riverdale coach to win more than one state title there.