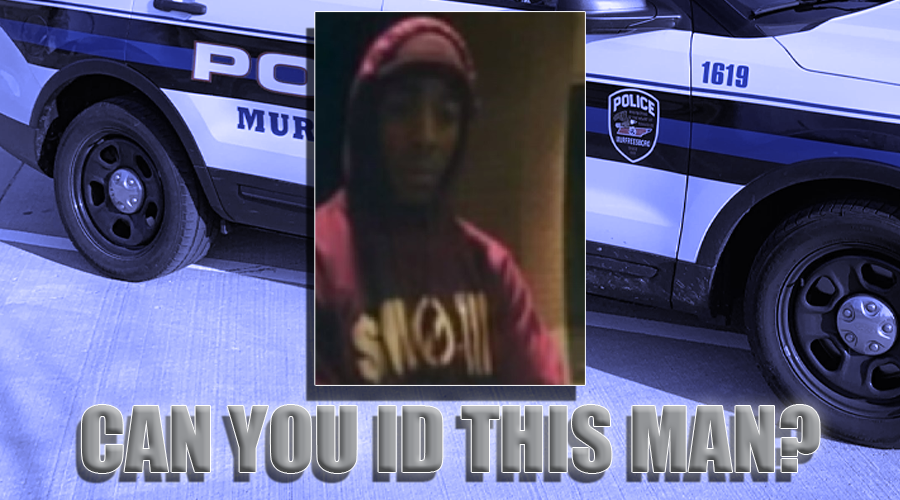 If you know the male pictured, or have any information on the case, please contact Murfreesboro Police Detective Cody Thomas, 629-201-5537.

A couple was walking across the parking lot at the Blue Apartments in Murfreesboro (2707 South Rutherford Boulevard) told police that two masked men ordered them to hand over everything. The unknown thugs left with cell phones, jewelry and wallets containing cash, credit and debit cards. Later, the male victim discovered that $300 was taken from his bank account via his debit card.

Surveillance cameras at the Blue apartment complex captured several pictures, but the most useful is a photo believed to be one of the two suspects before he put on a mask. Murfreesboro Police Detective Cody Thomas is investigating the robbery (call 629-201-5537 if you recognize the suspect).

UPDATE: The Blue Apartment complex is participating in the "Crime Free Multi-Housing Program," sponsored by the City of Murfreesboro and MTSU. The program was implemented in 2018 to reduce criminal activity different housing complexes.

MPD Public Information Officer Larry Flowers told WGNS, "The Blue Apartment community is not a fully certified Crime Free Multi-Housing Program property. The complex is an active participant and is working towards full certification, but haven't achieved that status. Because of the positive relations between the management at The Blue and MPD, the complex assisted with the investigation and a surveillance photo was quickly obtained.

Unfortunately, crime continues at the address, although the apartment name has changed a few times.

In 2017 Murfreesboro Police were called to the same location for a shooting victim, but at that time the apartment was known as "University Ridge." 19-Year-old Jaylin Juan Pritchard was shot in the head and killed in the parking lot.

In 2015 a total of five individuals were apprehended on drug charges. When police showed up officers witnessed bags of marijuana actually being thrown out of an apartment window.

MPD Officers knocked on a University Ridge apartment door in July of 2013 due to the suspicion of drug sales. Five men were arrested and one of several responding officers wrote in a police report, "I charged all parties with felony distribution of a schedule six and felony drug paraphernalia."

The same complex was once known as "Campus Crossing South." During that time in 2007 a Rutherford County Court indictment indicates two men entered an apartment unit at gunpoint, tying one resident up with a rope. In that case, one of the intruders was shot and killed while the other was caught and charged with especially aggravated robbery and especially aggravated kidnapping.