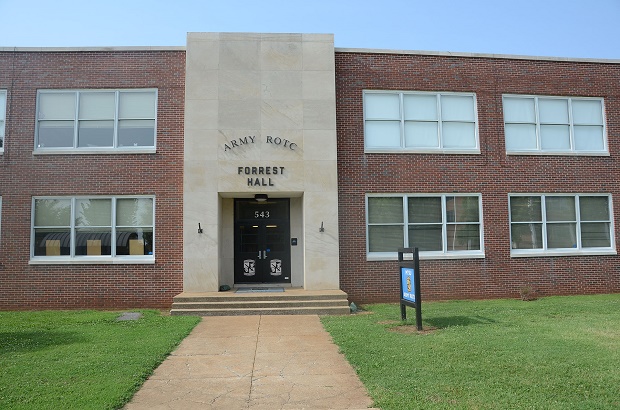 The MTSU Forrest Hall task force will meet Thursday, April 14, at which it will discuss making a recommendation to the university's president regarding a possible name change to the ROTC building on campus.

The meeting of the 17-member task force will begin at 6:30 p.m. Thursday in the MT Center, located inside the Sam H. Ingram Building at 2269 Middle Tennessee Blvd.

Seating will be limited and those planning to attend are reminded of the ongoing construction along Middle Tennessee Boulevard.

The university announced last summer that it would engage the community on the name of the campus building that houses MTSU's Army Reserve Officer Training Corps program and is named after Confederate Gen. Nathan Bedford Forrest.

Thursday's meeting follows three previous meetings in which input from the public was received. There will be no public comment at Thursday's meeting, which is strictly for task force deliberations, according to task force chairman and MTSU professor Derek Frisby, a Civil War historian and faculty member in the Global Studies and Cultural Geography department.

MTSU President Sidney A. McPhee asked the panel to recommend by this month whether the building should be renamed; retain the name but with added historical perspective; or recommend that no action or change is warranted. The Tennessee Board of Regents would have to approve any recommended name change and the Tennessee Historical Commission would have to give approval as well.

For more information about the task force, including a list of its members, visit http://www.mtsu.edu/forresthall.